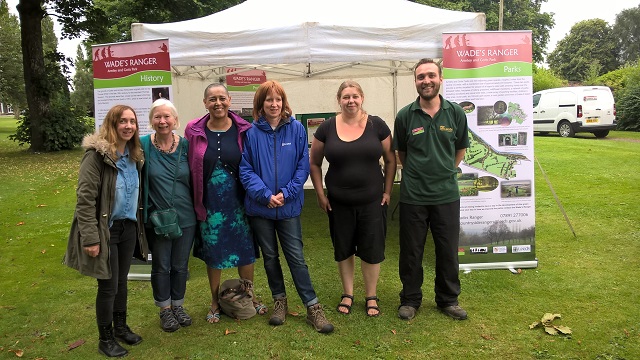 A £30,000 grant to improve Gotts Park and Armley Park may be just the start of ambitious plans to improve the area, say local campaigners.

The Wade’s Ranger project has been awarded the grant to deliver a major project to improve the Rose Garden, historic Lantern Lane and Gotts Mansion in Gotts Park.

The Rose Garden, originally the kitchen garden for Gotts Mansion, is an underused asset in Gotts Park and following a community consultation carried out by the Friends of Armley and Gotts Park in 2017, it was decided to develop the Rose Garden as a community growing, play, events and activity space.

This consultation also highlighted the need to restore railings to the terrace overlooking the lawn at Gotts Mansion to create a safer space for events and reinstate a historic feature.

The historic Lantern Lane will also be improved by the Wade’s Ranger and volunteers. This popular route was regularly used by the cloth workers of Armley to reach their places of employment in the mills of Burley and Kirkstall. The long hours worked required walking before daybreak and returning home after dark, thus they walked in groups carrying Lanterns.

The £30,000 grant from charity Cobbett Environmental, along with further funding from the Wade’s Charity and Leeds City Council.

Cat Hyde, from the Friends of Armley and Gotts Park group, said:

“We are particularly excited about the plans for The Rose Garden; we have worked with The Orchard Project to design an edible community garden and orchard which we are sure will encourage more people to use the space and promote community cohesion and healthy lifestyle opportunities.

“The restoration of Lantern Parade will provide an obvious link between the 2 parks and promote safe walking across the golf course to the Mansion House, we hope this will be in time for our lantern parade in November. We believe this is the start of lots of positive improvements in the parks so they will be better used by local people.”

“The role that parks play in our communities and in the day-to-day lives of residents cannot be underestimated. The refurbishment plans which have been set out through the Wade’s Rangers project for the Rose Garden, Lantern Lane and Gotts Mansion in Gotts and Armley Park are absolutely fantastic.”

The Wade’s Ranger project was started in May 2017 and is delivered by a partnership of the Wade’s Charity, Leeds City Council Parks & Countryside Service, Gotts Park Golf Course Community Interest Company, and the Friends of Armley and Gotts Park to improve the parks and encourage people to use them more for a range of healthy outdoor activities, such as walking, children’s play, sport and volunteering.

If you would like to volunteer to help improve Armley and Gotts Parks, please contact the Wade’s Ranger at 07891 277006 or email claire.rogers@leeds.gov.uk.

Friends of Armley and Gotts Park is a volunteer group of local residents who want to improve the local parks for the community. More information on armleyparkfriends@gmail.com.