Letter: Do you recognise Connie from Pudsey? Edinburgh Fringe beckons … 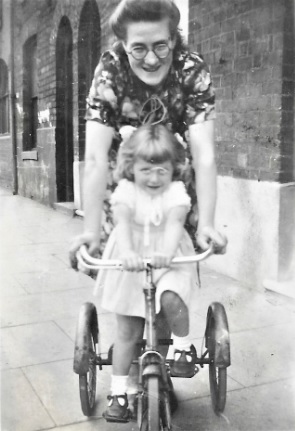 Does anyone recognise the person helping the child on the tricycle? I am Polly Pattison, the child, now aged 77, and all I know about my helper is that her name is Connie and in the early 1940s she lived in Pudsey.

During the Second World War my mother, Ethel Warrener, and me, then known as Pauline Warrener, were evacuated from Hull to Pudsey.

My mother became friends with Connie who had a daughter called Carol about my age (born 1941).

A couple of years ago, long after my parents had died, I found a bundle of letters from my mother to my father written in the early war years when he was serving in North Africa and Italy with the Eighth Army. Going through the letters I came across several references to Connie and our time in Pudsey.

Unfortunately, there is no mention of Connie’s surname but here are some snippets that may help someone remember.

There is an address ‘9 Roker Avenue’ (now demolished I believe), Connie’s husband was a POW in Singapore, at one time we were ‘next door to Italians’, and we often went to a nearby park, Connie spent some time in 1943 in North Cave, a small village about ten miles north of Hull – perhaps evacuated herself?

The letters cover the years 1940-1943 but I think that Connie and my mother remained friends as the photograph of Connie and me was taken in 1945, and as far as I can tell, was taken in the street where we lived in Hull.

I am presently putting together a drama devised from the letters that will preview at The Holbeck in South Leeds on June 29th (Armed Forces Day) before appearing at the Edinburgh Fringe in August. It would be lovely if I could include more detail of our life in Pudsey.

Assuming Connie to be the same age as my mother she would be over one hundred years old and unlikely to still be with us. But if any of her descendants would like to get in touch, I will be very grateful for any information, however small.

Please telephone me on 01482 351259 or email to pollypattison@hotmail.com. More information on my project can be found here and for the performance at The Holbeck on the Slunglow website.