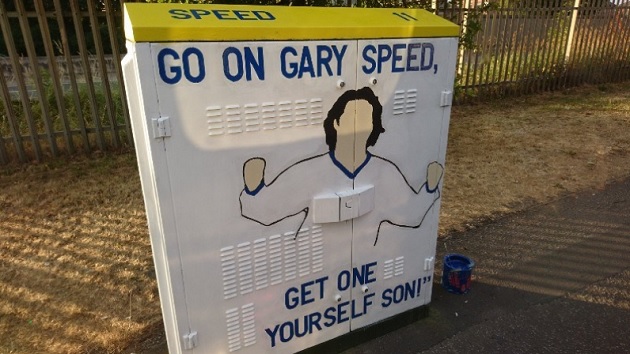 Leeds United Football Club hasoffered their support to the man dubbed as “Burley’s Banksy” after his street art was vandalised earlier this week.

The artist, who’s real name is Andy McVeigh, revealed on Twitter that he had been to the Elland Road based club to talk to managing director Angus Kinnear and the clubs head of media and communications James Mooney.

#lufc invited me down to ER today and I had a chat/meeting with Angus Kinnear and mainly James Mooney about the art being trashed. They have offered their total support & are contacting Council etc to properly 'legitimise' my art & show they are 100% behind it.
They were great &

“[Leeds United] invited me down to Elland Road today and I had a chat/meeting with Angus Kinnear and mainly James Mooney about the art being trashed.

“They have offered their total support and are contacting the council etc to properly ‘legitimise’ my art & show they are 100% behind it.

“They were great and so supportive and also as gutted as everyone else about the vandalism.

“They’re going to give me money to take days off from supply teaching to re paint them/buy paint etc. They have also said me and my Danny can have tickets for matches etc. I had to stop myself from hugging James at that point! I may also do some art inside ER in future. Amazing. It genuinely feels that they care for the club, players, fans and all general staff. Pretty sure none of this would have happened with previous owners.”

As reported earlier this week almost all of Andy’s Leeds United-themed street art around Burley and Elland Road was painted over with black paint by a group calling themselves Leeds Residents Against Graffiti.

The group of four say they “represent the 90% of the citizens of Leeds who are not obsessed with Leeds United, and do not need to see public areas painted with these mindless slogans”.

“Andy was part of a community group in Burley who started painting the boxes in the Kirkstall/Burley area about five years ago.

“They had permission from Leeds City Council, Virgin Media and support of the local councillors. He’s continued this work. It’s such a shame that Andy’s art has been vandalised in such a way.”

A Justgiving page which was set up to help pay for new materials for Andy has smashed its initial £500 target raising almost £2,500 in three days.

Keep up to date with what’s happening in West Leeds by signing up for West Leeds Dispatch’s daily e-mail.