It was dubbed the ‘ten-tonne tip run’ – and the amount of rubbish cleared by volunteers at the third Kirkstall riverbank clean-up on Saturday showed just why.

Everything from discarded Morrisons shopping trolleys to litter, electrical equipment, driftwood, the effects of flytipping and himalayan balsam were cleared out of the banks of the River Aire by local volunteers.

@JonathanMoxonEA thanks for the icecream- well deserved! we hauled 1.78T in lightweight litter & debris- wow! pic.twitter.com/b7iEYMTX0C

All three clean-ups have seen tonnes of rubbish removed from the riverbank following the Boxing Day floods which left parts of Kirkstall ROad under several feet of water.

Here are just some of the tweets from the day:

What a fantastic day!Thanks #teamkirkstall for awesome effort! wonder how close our 10T target is after todays haul! pic.twitter.com/k1RKr4k2IF

It's okay @Morrisons we saved your trolley – just let us know how we can reclaim the £1. #Kirkstall @Opensourceleeds pic.twitter.com/HpFlDblqNy

This is an army im proud to be part of! @Clean_Leeds #kirkstallcleanup ten tonne party here we come! pic.twitter.com/5NoKygapRI

Check out the dates of the next riverside clean-ups… 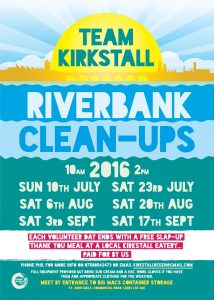