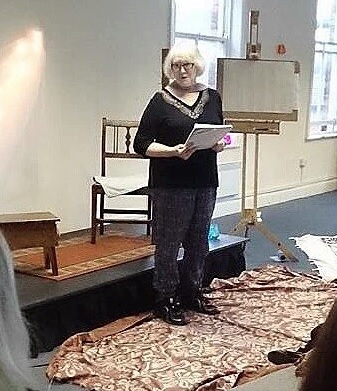 I’m Sue, I’m 68 and I’m a part-time mature student from Bramley. One of a few undergraduates in their so-called, ‘third age’.

Why study now? There are many reasons and if you see me around on campus please ask, I’d be very happy to tell you! Meanwhile here are a few clues.

As a teenager I’d a notion to go to Bretton Hall (in what’s now Yorkshire Sculpture Park), in those days it was a teacher training college for design, music, visual and performance arts, and latterly became part of the University of Leeds.

A disruptive home life meant that my academic ability wasn’t a family priority. A teacher, a Bretton Hall graduate, encouraged me to think beyond the limitations of my practical circumstances and instilled in me a love of learning.

When I left school at 15 I worked but also attended evening classes, for both accredited and leisure courses.

In mid-life I attempted to take a degree course as a career move but caring responsibilities and work commitments meant I couldn’t continue.

My application to university in 2012 arose out of a need to do something intellectually challenging to counterbalance a high level of practical care I gave to my sick brother.

Now retired, I thought I could juggle attending to his needs but also study part-time. It wasn’t to be. Sadly my brother died suddenly the week that I was accepted at university.

My first choice of program had been Cultural Studies, but I was admitted instead to the School of Sociology/Social Policy where I passed Level 1 before deciding to transfer to Cultural Studies.

I had the option to enter at Level 2 but because of the school’s differing perspective I considered that too daunting. I chose instead to ‘start over’ at Level 1 in the School of Fine Art, History of Art and Cultural Studies (FAHACS), which automatically meant the six years of part-time study became eight!

As I’d already been on and off campus since my teens (trying to get in to gigs) another couple of years didn’t scare me.

The course content at Sociology/Soc Policy was hugely helpful for me. It helped me slot my disruptive family woes in against the backdrop of the social engineering that took place before and after the two World Wars, and to recognise that together with the emotional impact of the suffering of those, whom like my parent and grandparents in the war effort, had significant repercussions for them and us their offspring.

Once transferred to Cultural Studies however I knew I was ‘home’. It’s a field of critical theory which echoes my long-term interests.

Writing essays is particularly hard for me as I have a learning style akin to Dyslexia, but formulating essays helps me to consolidate and better articulate many of those long held ideas.

And many of the books in the university library are stamped ex-Bretton Hall. In a roundabout way I made it there!

Academic life is very demanding at any age, and sometimes if our expectation doesn’t match the actual experience it’s tough.

Any ageism experienced irrespective of our calendar age, is one -ism that deserves an improved focus, but I found it possible to negotiate a path through.

As a ‘third ager’ I didn’t have the expectation that I’d ‘fit in’ at university but I also didn’t expect to have to consider myself as ‘mature’ at every turn. I’ve always enjoyed inter-generational friendship and I’ve worked hard not to ‘grow up’! So it’s been lovely in each module to find some traditional age students become friends.

Joining and helping out at an LUU society, (MatSoc), has pushed me to explore new skills; social media, and rediscover older ones; resilience, as well as making friends.

It also made me more aware what a diverse group ‘mature’ students are, and what a varied set of obstacles they navigate to be at and stay here at university.

Some might critique the wisdom of investing in the learning journey of a retired extra-mature student, but I think it’s warranted.

People in my age group survived an education system that mainly prepared us for low paid employment or domesticity.

Subsequently as unpaid carers we have saved the government money, or if employed, paid taxes, which has helped many others to access higher education. I view mature students of all age bands an great asset to both the campus and the wider community.

Some recent medical health issues and other longer term residual effects of past episodes of acute mental distress, and its treatment, mean I had to have temporary leave most of last year. But I plan to be back.

We encourage anyone living or working in West Leeds to use this website to tell their news and stories. You can either use our Create an Article page, or e-mail us at news@westleedsdispatch.com.

Facebook
Twitter
Pinterest
WhatsApp
Previous articleNew Wortley: “In the end they did put a crossing in, but it shouldn’t have taken the sacrifice that it did”
Next articleArmley: New shops get green light – at third attempt