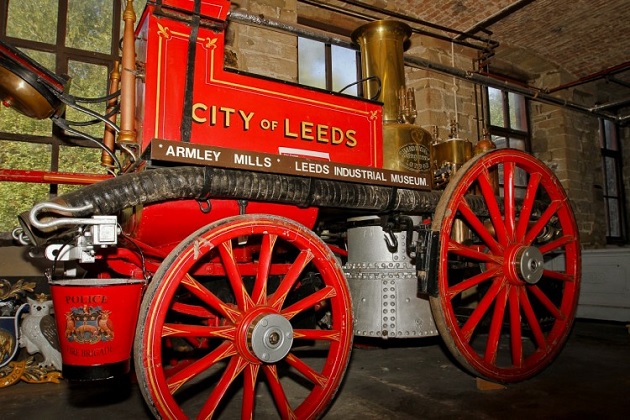 Almost 130 years since it was first in service, a mechanised masterpiece at Armley’s Leeds Industrial Museum will be firing visitors’ imaginations as part of a new exhibition celebrating the history of engines in Leeds.

Made for the City of Leeds by the famed Shand Mason and Co in 1891, the fire engine, complete with a dazzling boiler crafted  from Yorkshire iron, was employed at the old Gipton Fire Station.

Able to raise steam on its way to a fire and needing only two firefighters to operate it, its “double vertical” design became the most successful fire engine of its time.

The vintage fire engine is one of a number of feats of Leeds engineering which will be on display as part of the museum’s new Power House exhibition, which opens to the public this week.

The driving force behind centuries of industry and innovation in Leeds, other exhibits include a Hattersley Pickard Fan, which in times gone by was used in the traditional Russian steam room at historic Bramley Baths.

“Engines have been the heartbeat of some of the biggest and most important innovations of the last few centuries and their rapid evolution and development has gone hand-in-hand with major advances in fields such as science, production and travel.

“In Leeds, those machines became a cornerstone of the city’s status as global industrial powerhouse, enabling Leeds to become one of the world’s leading lights in the production of wool and textiles and locomotive building.

“Those accomplishments, spurred on by the power of engines, left a legacy which can still be seen all around us today, not only in our history and heritage but in the city’s modern-day reputation as a centre for engineering excellence.”

Visitors to Power House will also get the chance to see Fiona Elizabeth, the museum’s vintage mill engine, in action.

The engine takes her name from Fiona Lister, descendant of Steward Tempest, owner of Armley Mills in the early 1900s, and Elizabeth Tempest, daughter of the last owner of the mill, which today houses Leeds Industrial Museum.

After being employed in a flour mill in Kent and at a dye works in Lower Wortley, at the end of her working life the engine fell into disrepair but from 1980, a team of volunteers and museum staff spent around 4,700 hours restoring the machine to working condition.