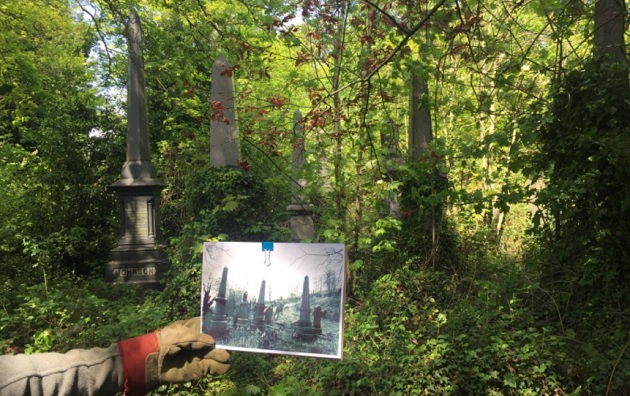 The neglected Rehoboth grave yard on Farsley’s Coal Hill Lane is now getting the makeover it deserves.

John, who is one of the leading lights behind the successful Bramley War Memorial group, said:

“It is going to be a community asset and an ecological site for the benefit of Farsley.”

18 months ago five people got together and, for their own reasons, decided to try and buy the two-acre Rehoboth Cemetery and restore it to as near its former glory as possible.

18 months later the land has been bought (for £30,000) from its private owner and the clear up is under way thanks to the hard work of the trustees and volunteers.

There is still a long way to go and another £28,000 is required to keep it going.

Since starting the clear up a Badger sett has been found, along with numerous different types of birds. With nature in mind no weed killer or any other treatment has been used.

A total of 245 graves have been tagged but there are still a great number to go, including at least 11 war graves.

If you or anyone you know has a friend or relative buried here please contact  farsleyrehoboth@gmail.com.

It is hoped that the grave yard will be open for the Heritage Open Day on 22nd September and then open on set days afterwards.

John and Richard gave special thanks to eight students from The Co-op Priesthorpe Academy who spent a week clearing paths of nearly six-foot-high weeds and bracken by hand.

A very special thanks go to Pro-FIT  28 for allowing the volunteers to use their toilets and showers, also Springfield Mills, Gaunts Properties and other local businesses.

The burial ground is the resting place of 4,000 local people interred between 1785 to 2000, many of whom still have family who live locally. It had been in private ownership for many years.

If you feel you could help by either donating tools, volunteering or donating money contact the Friends of Farsley Rehoboth Baptist Burial Grounds at farsleyrehoboth@gmail.com,  or the Go Fund me page, Facebook: @farsleyrehoboth, or Twitter @FarsleyOf.

UPDATE 1.02pm, July 26: The Rehoboth has been bought by registered charity Friends of the Rehoboth Baptist Burial Ground, which has the objective of returning the burial ground back to the community after many years of no public access.