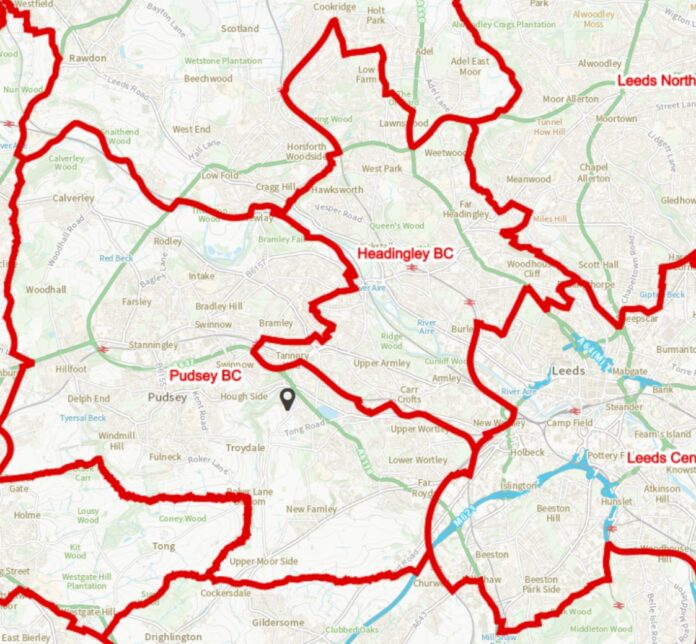 A second public consultation has been launched into a shake-up of England’s electoral map, which could see Labour’s Shadow Chancellor Rachel Reeves’ Leeds West constituency disappear.

The proposals, first announced last year, would see the Leeds West constituency become obsolete, with its wards divided into other constituencies.

The Pudsey seat would lose the current communities of Horsforth, Guiseley and Rawdon, which would move into a revised Leeds North West County Constituency.

Since 2010 Leeds West has had Labour’s Rachel Reeves as its MP and Pudsey has had Conservative Stuart Andrew.

The Boundary Commission for England (BCE) is now inviting comments during its secondary public consultation on constituency boundaries, which is open until 4 April 2022.

The 2023 Boundary Review requires substantial changes to the map of constituencies across England, and the Commission wants members of the public to help shape the boundaries in their area by taking part in a consultation, running 22 February – 4 April.

View the initially proposed constituency boundaries for your area and provide views on them by visiting the consultation website. Responses can also be sent in by letter, e-mail or provided in person at a public hearing.

The Commission will hold 32 public hearings across the country throughout the consultation period, allowing members of the public to have their say in person about the proposed changes in their area.

The Commission received over 34,000 responses from the public during its first consultation last year. These comments are now available to view by area, along with the initial proposals for constituencies, on the consultation website.

Secretary to the Boundary Commission for England, Tim Bowden, said:

“The 2023 Boundary Review will rebalance the number of electors represented by each MP. It’s important that the constituencies we shape reflect your local community as best as possible. We received over 34,000 responses during our first consultation last year which are available online for the public to read and comment on. We’re inviting more people to have their say in our current secondary consultation, which is open now until 4 April.”

The BBC reports that the proposals would be the first major overhaul of seat boundaries in England since 2010, with just under 10% of existing constituencies remaining unchanged.

Unlike previous reviews, the total number of seats in the House of Commons will stay at 650 but population changes mean England is set to have 543 MPs, Wales 32 and Scotland 57 – that is an extra 10 for England, with Wales losing eight and Scotland’s count cut by two.

The current proposals come after plans first proposed by the former Conservative prime minister David Cameron to cut 50 seats were dropped by the government in March 2020 because of the “Brexit workload”.

These plans also proposed the loss of Leeds West and a revised boundary for Pudsey. They were slightly different, with Kirkstall, Burley and the Hawksworth Wood estate – which currently operate under Leeds West – coming under the Leeds North West seat alongside Horsforth, Yeadon, Otley and others. Farnley and Wortley would have moved out of Leeds West and become part of the Leeds Central constituency and Pudsey would have gained Armley and parts of Bradford Moor and Laisterdyke in Bradford, as well as Bramley, Pudsey, Swinnow and Rodley.