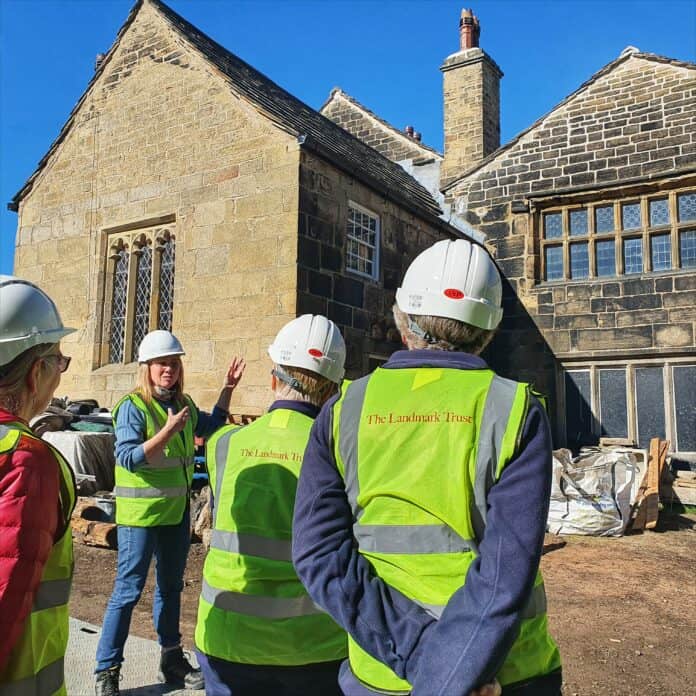 Heritage Open Day visitors to Calverley’s Old Hall had to don hard hats to look at the major renovation work being carried out there.

The Landmark Trust, owner of the historic Hall, was awarded £1.6million by the Heritage Lottery Fund to renovate the Hall, part of which dates back to the 12th century.

The Grade 1 * listed building was bought by the Trust more than 40 years ago and has offered part of the building as holiday lets.

The more historic parts of the building fell into disrepair, with led to the hall being added to the Heritage At Risk register. It was thanks to the Lottery and the discovery of a rare Tudor wall painting that the funding was secured and the work was able to start.

After repairing the roof to preserve the timbers inside, contractors were able to start work, under the watchful eyes of the Trust’s historians.

Regular open days have been held to show the extent of the work that needed to be carried out. This latest series of open days included a special viewing for neighbours before tours were offered to the general public – provided everyone wore hard hats.

Previous visits to the Hall have given glimpses of what was once a high-status manor house, but there was debris scattered around, weather damage and the vandals had been inside.

With hundreds of years worth of living there, many modifications had been made, including 20th century gas fires and cupboards, as it was inhabited by tenants until a few years ago.

The tour, led by one of the trust’s historians, highlighted how much progress had been made since work started a couple of years ago.

Once the two-year project is complete, the Hall will be a holiday let for 10 people, and fully accessible to wheelchair users.

Part of the site will be set aside for community use and local schoolchildren will help design and plant the garden.

Read more about the Hall’s history and murderous past here. See the architects’ drawings and plans for the Hall here.