From Pudsey to Armley via Morecambe: Potts clock takes pride of place 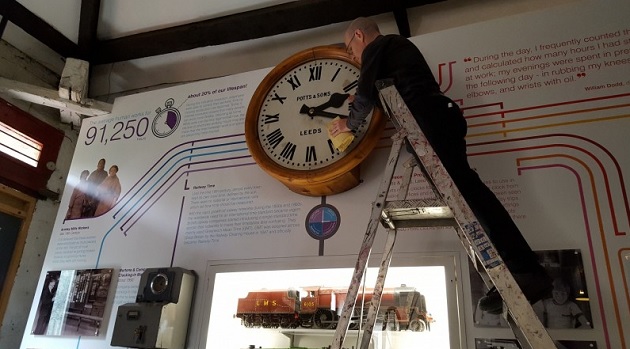 A 111-year-old clock from a Pudsey clockmaker which once kept time at an Edwardian holiday hotspot is alive and ticking after being restored to its former glory.

Once the stalwart timepiece at Morecambe Promenade railway station, the impressive clock has taken pride of place at Leeds Industrial Museum in Armley this week after months of painstaking restoration work.

Made by Pudsey clockmakers Potts and Sons from solid pine, the clock was originally installed in the circulating area at Morecambe Promenade station when the building was reopened in 1907.

Morecambe was affectionately known as ‘Bradford on Sea’ because of the huge influx of West Yorkshire tourists and its station was even built close to the old Midland Hotel so holidaymakers could go straight there on arrival.

A striking example of Leeds craftsmanship, the station’s clock was bought by the museum from a private collector who had owned it since the 1970s.

John McGoldrick, Leeds Museums and Galleries’ curator of industrial history, has spent months preparing the clock for display. The museum has also been helped by specialist clock volunteers Eric Robinson and Tom Precious.

The clock is now part of a new interactive display which explores the ways peoples’ working patterns have been governed by the clock. John said:

“It’s quite a proud moment to see the clock going back on display, keeping time in a place where it’s surrounded by so many other examples of Leeds’s long history of leading the way in the fields of industrial and technological innovation.

“Potts and Sons started out as very much a local, family firm, but they became the benchmark for Victorian clockmakers and their creations were eventually installed at public buildings all around the world.

“This particular timepiece must have been one of the very first things that tens of thousands of Edwardians saw when they arrived at Morecambe for their summer holidays. It’s great to think that our visitors will get the chance to enjoy it now too.”

Potts and Sons, were established in Pudsey in 1833 by William Potts.

As the company grew and moved into a Leeds city centre base, they supplied 1,568 clocks for locations, including Leeds Town Hall, Leeds Corn Exchange and the former Thrift store in Kirkstall.

Potts clocks could also be found at Lerwick Town Hall in the Shetland Islands, the Roman Catholic Church Hall in Melbourne, Australia and the post office in Port Lyttleton, New Zealand.