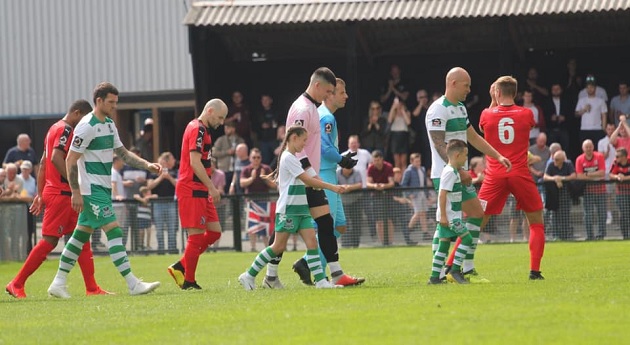 Farsley Celtic got life in the National League North off to the perfect start with a 3-1 victory against Darlington.

Tyler Walton, Nathan Cartman and Jimmy Spencer all scored in a stunning first-half for the Celt Army, whilst Adam Campbell’s second-half strike proved to be too little for the Quakers.

Farsley Manager Adam Lakeland was delighted with his side’s performance, as he said:

“In the first-half I thought the lads applied the game plan to perfection.

“In the first-half we were really good and we really restricted Darlington from getting their passing game going.

“The second-half with the position we were in, we wanted to try and manage the game, control the game.

“We knew they’d have more possession throughout the game, and there were certainly, in that second-half, long spells where we didn’t have the ball, but I thought our organisation and discipline was really good.”

The visitors attempted to assert their authority on the game in the opening moments and started on the front foot, with Farsley ‘keeper Elliot Wynne forced into action to save Adam Campbell’s weak strike inside the box.

Yet it was Farsley who broke the deadlock, as Louis Laing’s poor clearance fell to Tyler Walton 25-yards out, and the debutant unleashed a stunning strike that flew into the top corner.

Just minutes later Farsley doubled their lead, Jack Higgins playing a ball over the top to Will Hayhurst who squared for Nathan Cartman to tap home against his former club.

After 35 minutes Adam Lakeland’s side were in dreamland, Darlington making the fatal mistake of leaving Jimmy Spencer unmarked in the box.

The Quakers failed to deal with Isaac Baldwin’s long throw, and last year’s Northern Premier League Player of the Year slotted home unchallenged at the back post.

However, Alun Armstrong’s side came out fighting after the interval, and Adam Campbell should have scored after being sent through on goal by Jarrett Rivers, but Jordan Richards recovered and made an excellent block.

After a couple of half chances for the visitors Adam Campbell did manage to pull a goal back with 25 minutes to go, curling a sumptuous strike into the top corner from outside the box, leaving Elliot Wynne with no chance.

Campbell could have set up a grandstand finish as he came close with 10 minutes remaining, but after cutting in from the right his curling effort took a slight deflection just wide.

Despite controlling much of the possession in the second-half, Darlington were unable to break down the resolute Farsley defence on more than one occasion, with the Celt Army getting the new season up and running with a terrific three points.