Farsley Celtic edged out in seven-goal thriller at Chorley 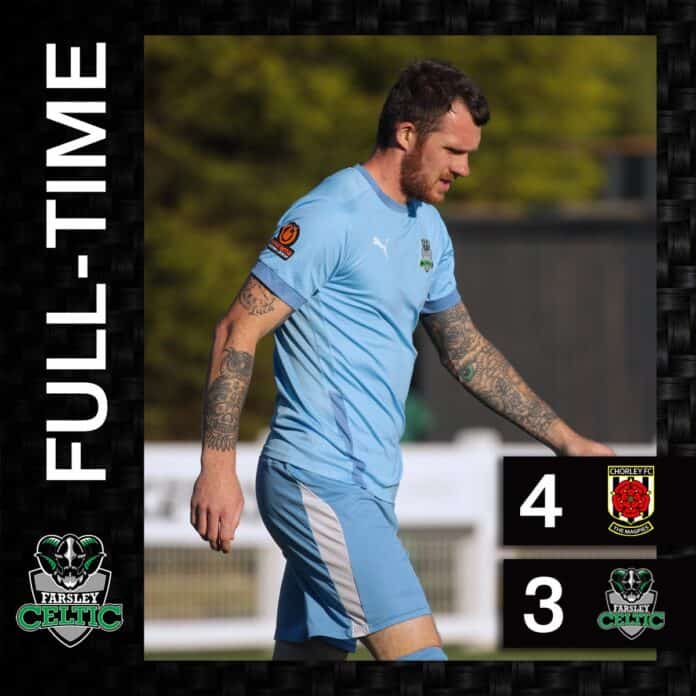 Battling Farsley Celtic were beaten by Chorley in a seven-goal thriller that had everything from world-class strikes, a sending off and some sloppy defending.

Backed by around 50 vocal visiting fans, The Celts will be kicking themselves that they didn’t get something from the game.

The visitors suffered the worst possible start. Already missing three first-choice defenders, central defender Isaac Assenco was forced off after taking an early knock, and The Celts were hit by a hammer blow when Jack Sampson scored from just inside the box following hesitancy in the Farsley backline on 10 minutes.

Matt Urwin then had to acrobatically deny Kian Scales from distance, before the Celts leveled on 25 minutes thanks to a terrific Frank Mulhern free-kick off the post from 25 yards.

Sub Carlton Ubaezuonu then put the visitors in front seven minutes later, heading home his first Farsley goal from Luke Parkin’s cross. He could have made it 3-1 but failed to convert a one on one.

Despite a bad miss from the home side when they were through on goal, the Celts thoroughly deserved their lead going into half time.

Too often this season The Celts have failed to turn up for the second half, and for the most part fans Victory Park saw the pattern continue.

At 2-2 the game was finely poised – but two minutes later Sampson doubled his tally with a stunning overhead kick to give the Magpies the lead.

The goal looked to have sealed the game for the hosts, and The Celts were left fearing another heavy defeat. But there were more twists to come.

Scott Leather was given a second yellow card late-on for a silly challenge on Osadebe and minutes later an almighty scramble almost got The Celts back in the game, but keeper Urwin made two incredible point-blank saves on the line. With Chorley throwing men in front of the ball, Jimmy Spencer hit the rebound high and wide and the game looked finished.

To their credit, The Celts kept going and Ubaezuonu headed his second goal from a Mulhern cross deep into injury time. The home side saw out the final minutes to leave the visitors wondering what could have been.

The Celts will be hoping to get back on track as they entertain Banbury at The Citadel next Saturday.

Boss Russ Wilcox was left frustrated by his side’s second half showing and worried by the number of injuries in the Celts’ patched-up defence: