Farsley Celtic edge out Stalybridge to stay top of the league

It was Farsley who won the battle of the Celtics at Throstle Nest, with a 2-1 victory over Stalybridge, writes Tom Ritchie.

First-half strikes from Dave Syers and Jimmy Spencer were enough for the hosts, who withheld a second-half onslaught from a Stalybridge side that gave Farsley a scare when Michael Howard pulled one back.

“I thought Stalybridge were much better in the second-half and they threw plenty of bodies forward and asked plenty of questions of us.

“I felt we deserved the win overall, we still had numerous opportunities in the second-half where maybe decision making and execution let us down, but first-half we could have been at least another goal ahead.”

Farsley got off to a dream start, taking the lead inside one minute as Paul Walker superbly slipped in Dave Syers, who slotted home.

Nathan Cartman could have made it two a short while after, rising highest but heading Will Hyahurst’s delivery across goal and wide. 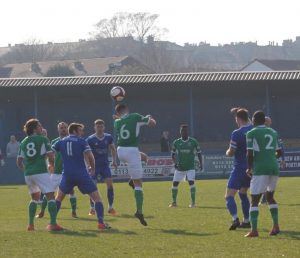 The hosts did double their advantage after a brilliant team goal, Paul Walker and Ben Atkinson playing a swift one-two before the latter drilled the ball across goal for Jimmy Spencer to roll home.

Adam Lakeland’s side continued to dominate, and Paul Walker and Will Hayhurst both came close before the end of the first-half. The former headed Spencer’s centre over, before Paddy Wharton produced a stunning save from Hayhurst’s free-kick.

Paddy Wharton came to the visitors’ rescue again early on in the second-half, as he superbly saved from Spencer when one-on-one.

From that point on Stalybridge pushed onto the front foot, and Farsley shot-stopper Kyle Trenerry made two excellent challenges with his feet, firstly from Ross Dent before an even better stop from Neil Kengni.

With 25 minutes remaining the visitors pulled a goal back, Douglas Nyaupembe crossing for Michael Howard to nod home at the back post.

Nyaupembe then had a chance of his own as the ball dropped to him kindly on the edge of the box, however the fullbacks’ volley flew comfortably over.

After bringing on Kwame Boateng and moving Ben Atkinson into midfield Farsley started to get a grip on the game, and should have extended their advantage as Dave Syers dragged wide.

Then in the closing moments Boateng played in Spencer who twisted and turned before dragging wide, with Farsley seeing out the closing minutes to secure all three points.