The Celts have played The Unicorns twice already this season, being held to a frustrating 0-0 draw in the league before leaving Dimple Wells victorious in the Integro Doodson League Cup.

Daniel Byrnes gave Ossett the early lead in that game, before three goals in five second half minutes put Farsley in the driving seat. 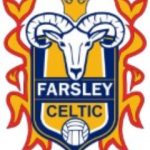 A wonderful long-range strike from Peter Davidson levelled the scores, before Lewis Nightingale and James Walshaw made it 3-1. A superb Declan Dwason strike hauled Ossett back into the tie before Jacob Hazel wrapped up the victory to secure The Celts’ progression.

A win for Farsley and a defeat for Lancaster City at Colwyn Bay could see Farsley top the division come 5pm on Saturday, as The Celts are currently just three points behind, with two games in hand and a vastly superior goal difference.

The goal difference was given a significant boost thanks to Tuesday’s demolition of Ramsbottom United, Farsley prevailing 7-0.

Hat-tricks from James Walshaw and Lewis Nightingale as well as a Richard Marshall strike handed The Celts the comfortable win.

This extended Farsley’s winning run in the league to six games, which included last Saturday’s thrilling 5-4 victory over Hyde United.

Farsley will be without the services of suspended striker James Walshaw who picked up a red card against Hyde, and Jordan Deacey is in a race to be fit in time. Other than that Farsley have a full squad to pick from.

Ossett Albion will be in a confident mood ahead of their trip to Throstle Nest, with a fine recent run seeing them pull clear of the relegation zone.

Wins over Kendal Town (2-1), Prescot Cables (3-0) and Colwyn Bay (3-1) has seen The Unicorns piece together a crucial three game win streak that has seen them rise to 15th in the league, 12 points clear of the relegation zone, with safety all but secured. They have no apparent injury concerns.

So why not come down to Throstle Nest to cheer on your local side, postcode LS28 5BE. Kick-off is at 3pm and admission prices are just £7 adults, £4 concessions and £1 U16s. See you there! #COYC

If you haven’t yet voted for James Walshaw in the Evo-Stik Player Of The Year Award make sure you do before Sunday’s deadline here.