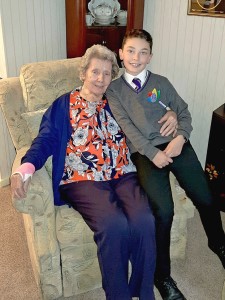 A Farnley Academy student has been praised by his community for his clear-thinking and caring ways, writes Judith Hurd.

Ryan Megson, a Year 8 pupil, was walking home at the end of the school day with his brother, Benjamin, when he noticed that a local resident, Mrs Westwood, had fallen in her garden and was unable to get up again.

Ryan and Benjamin immediately went to her aid, reassuring her that they were going to stay with her until professional help arrived. Ryan made a telephone call to the emergency services, asking for an ambulance to be sent to the location as quickly as possible, and he explained the situation to the operator.

He then telephoned Mrs Westwood’s daughter to alert her to what had happened.

Ryan stayed true to his word; both he and Benjamin remained with Mrs Westwood until the ambulance arrived. Mrs Westwood has now been discharged from hospital and she was delighted to be able to meet with Ryan recently at her home to thank him personally for his kindness and prompt actions on her behalf.

Praise has come for Ryan from the principal of Farnley Academy, Chris Stokes, who said:

“I am pleased to report that Ryan has been nominated to receive one of our highest and most prestigious awards at our Prize Presentation Evening next year. There is no doubt that the quick thinking and positive actions of one young man are an example to us all.”

Paula Megson, Ryan’s mother, has said that she is extremely proud of her sons’ actions and their compassion. Ryan’s behaviour has received acclaim across social media platforms, where he has been described as “a caring young man” and “a credit to his family”.

The Stephen Longfellow Academy stated that he was a role model to all students, while another individual noted that “Mrs Westwood is very lucky to have such a lovely, brave, quick-thinking student living near her.”

At a time when the news can bring so much concern over the society in which we live, this is a story to reassure our particular community that the future is in safe hands with individuals like Ryan and Benjamin.