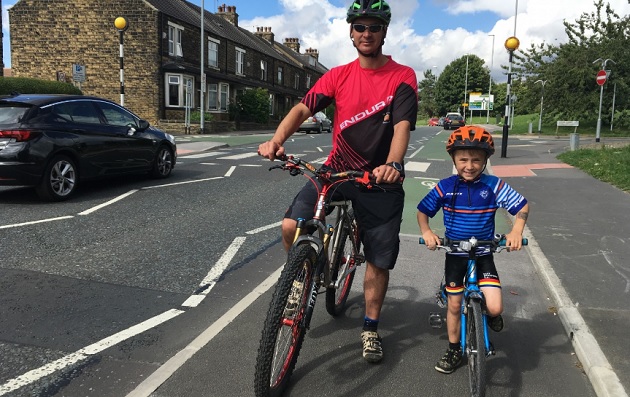 More than 700,000 cycle trips have been made since the Cycle Superhighway between Bradford and Leeds opened in July 2016.

Those are the figures released by the West Yorkshire Combined Authority today – with more than 10,000 journeys made on the Stanningley Road section during July alone.

A press release from WYCA says record numbers have been making the most of the summer weather on Bradford and Leeds cycling infrastructure, which was either built or improved as part of the £60 million CityConnect programme aimed at encouraging more people to cycle and walk.

“We’re delighted so many people have been making the most of these routes – not to mention the great weather – and travelling in a way that boosts their health and saves them money, as well as bringing wider environmental and economic benefits.

“Since opening in July 2016 the Superhighway has been used for more than 700,000 cycle trips, opening up walking and cycling routes to some of our most disadvantaged communities and connecting people with opportunities for work, training and leisure.

“We’re putting people at the heart of what we’re doing because we want West Yorkshire to be a place where nobody is left behind and everyone benefits from a modern transport network and a strong, successful economy.”

The cycle superhighway is a partnership project with Leeds City Council and the City of Bradford Metropolitan District Council.

This Wednesday (15 August) is Cycle to Work Day, which provides an opportunity to hop on a bike and see what all the fuss is about.

Meanwhile, New Wortley Community Club has received a slice of a £70,000 funding pot from City Connect to deliver a grassroots initiative enabling people to access work, school or training opportunities by cycling or walking.