Leeds City Council has performed a u-turn over a trial to improve traffic flow between Horsforth and Rodley roundabouts.

Motorists have suffered days of traffic chaos following a trial which saw the council alter the current lanes near the roundabout to a single lane uphill, allowing two lanes to be maintained for longer in the downhill direction.

The trial was supposed to sort problems on the A6120 Ring Road from Horsforth Roundabout, heading towards Rodley, which is still experiencing considerable traffic congestion at evening peak times despite multi-million pound improvement work carried out in 2015 on both roundabouts.

Council Highways officials have now admitted the trial was a mistake and have apologised. They said:

“On Monday … the first phase of the trial was installed and whilst some disruption was to be expected on the first day it was clear that by the end of the second day the impact this was having on Rodley roundabout was unacceptable and the decision was taken to abandon the trial. Whilst on paper, the proposals should have worked, the unpredictable nature of the uphill queue had a significant impact at Rodley.

“I am disappointed that the trial was abandoned but it has shown the sensitivity and pressure that this section of the ring road is under. I will be reflecting on the data collected and will use this to inform any future proposals in this area.

“I apologise for the disruption and any inconvenience caused but hope you can understand the reasons behind the trial and that the Council has acted quickly to resolve this.”

The changes had caused multiple problems in the area. Motorist Duane Ellis said:

“Since the lane closure morning traffic is atrocious. In the last couple of days there have been queues from as far back as the Owlcotes Centre, through Dawson’s Corner roundabout and down to Rodley as early as 7am.

“And this afternoon, 5th June, it took me 45 minutes to travel the 1.5 miles from the Dawsons Corner roundabout to Horsforth!”

“The first day of the road change caused major issues. I witnessed a first response ambulance having to do a u-turn near Rodley roundabout as the road was so busy he couldn’t get up to Horsforth, endangering lives, as well as causing disruption to all the surrounding area. [Traffic] goes all the way along the Ring Road near Wickes DIY in Bramley.”

A poll carried out by The Dispatch in April saw readers predict the problems: 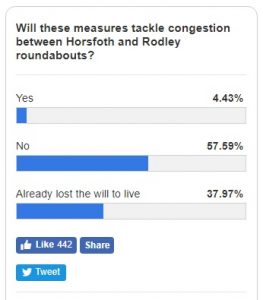