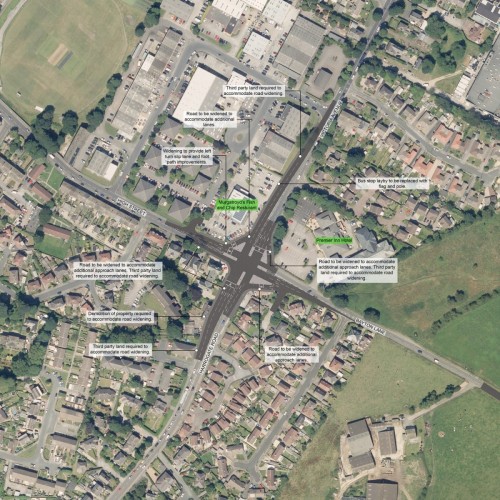 It’s been difficult to avoid the media kerfuffle surrounding the much-vaunted plans to increase access to Leeds-Bradford Airport in the north-west of the city in recent days.

In case you missed it, Leeds City Council has issued new details of the three options being considered to improve road access to the airport as well as more information on the proposed new airport parkway rail station on the Leeds to Harrogate line.

The release of the latest details, which includes new maps, images, an animation and fly-through videos of what the road options and parkway station could look like, form part of a public consultation on all aspects of the proposals until Friday, 12 April.

There’s no doubt that the proposals are long overdue.

Under current plans, the new station would be built between Scotland Lane in Horsforth and Cookridge, on the existing Leeds to Harrogate rail line. A spur road would run between the airport and the station, which would have a 350-space car park and a bus interchange.

The three options on the table for improved road access are:

Option A: The construction of a new road running from the A65 to A658 along the eastern side of the airport;

Option B: A new road running from the same point on the A65, but this time meeting the A658 to the south west of the airport;

Leeds Bradford_Opt B -Flythrough from Sunil Sharma on Vimeo.

Option C: Upgrades to existing junctions on the A65 and A658, as well as some localised road widening.

The latest projected costings for the LBA Link Route road options are £90-100m for option A, £60-70m for option B and £20-30m for option C. Funding for the station would come from the £173m left following the cancellation of Leeds’s trolleybus scheme.

A range of junction and capacity improvements are also being proposed at Dawson’s Corner at Pudsey, Fink Hill in Horsforth, and Dyneley Arms near Old Pool Bank, together with signal technology improvements along the A65 in a bid to reduce traffic congestion.

Investigations are also under way to identify longer-term improvements on the A6120 Outer Ring Road between Pudsey and Horsforth.

So where does West Leeds fit into all this?

The key here for people living in West Leeds is mention of Horsforth roundabout (which has long been a thorn in the side of people wanting to get from Rodley and Pudsey) and the long-mooted improvements at notorious Dawsons Corner in Pudsey.

Make no mistake, these proposals will have a considerable impact on roads in West Leeds, especially during construction.

It’s important the impact on West Leeds away from Horsforth is taken into account – the airport generates a lot of extra traffic for our roads and the planes a lot of noise above our heads. But where are the consultations in places like Kirkstall (where the already stretched A65 is an almost daily source of gridlock), Pudsey or even Rodley

Arguably Kirkstall, Pudsey and Rodley will all feel the impact of construction work – and any future schemes for road improvements need to be out in the open as soon as possible.

Much like the recent issues with the lack of consultation around flood defences along the Kirkstall Valley (which only subsided when residents kicked up a fuss), there’s a danger huge parts of West Leeds will go without having a proper say on the matter.

And it’s not good enough.