Volunteers are hard at work completing the arrangements for the Remembrance Sunday service in Bramley.

Members of the Friends of Bramley War Memorial group say between 300-500 people are expected to attend.

One of the organisers, Rodley resident John Barker, said he was ‘very pleased’ the service will have both an Iman and a Jewish representative to say Kaddish.

Ahead of Remembrance Sunday, the Friends group will be holding its AGM on Wednesday, October 28 at Bramley Community Centre. See the details below – all welcome to attend. 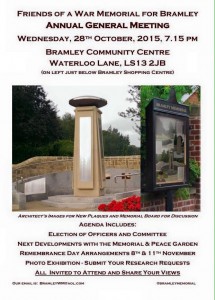 Mr Barker has also taken on another war grave related project – at St Peter’s in Bramley. He said:

“St Peter’s  had virtually all its headstones removed in the 1970s and replaced with huge featureless lawns. I’ve been asked (using old records) to create both a map and virtual memorial, so relatives can locate their relatives graves. We’re at the early/medium stages but some 3,500 records (more than 5,000 people) have been logged and mapped.”