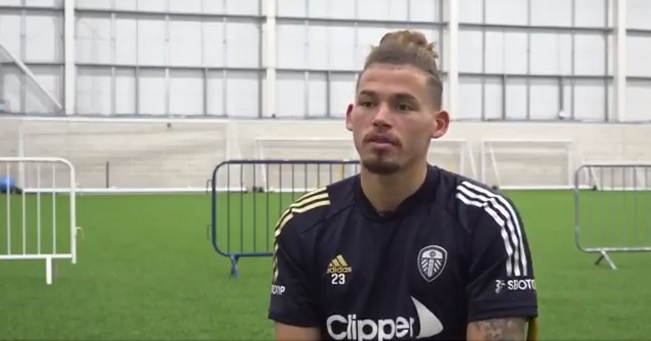 Leeds United star Kalvin Phillips made a special guest appearance on a zoom call to take part in a Q and A session with youngsters at Bramley’s Christ the King Catholic Primary School.

The Leeds captain, who started his career at Wortley Boys, was able to take part in an exclusive Premier League Primary Stars session on mental health and wellbeing.

A Leeds United Foundation coach spoke to the children about the importance of having a routine, speaking to others and using exercise and other activities to help them through difficult times, such as the current lockdown and the coronavirus pandemic.

During the zoom call the students took it in turns to ask the England international a range of questions, including asking him about his day to day routine, how he maintains positive mental health and has dealt with the lockdown, who he speaks to when he is feeling down and what he is most grateful for in life.

Speaking to LUTV after the virtual appearance, the midfielder said:

“I think there is going to be a lot more people that are going to recognise that they are struggling with their mental health and I think it’s massive for everyone.

“we need to be educating kids around the subject, speaking to each other and taking care of ourselves.

“When we’re out of this lockdown and hopefully when the virus calms down, we’ll be able to get back into schools, but I think doing things like this is massive for the kids. To have someone like me as a football player, to come and speak to them, it’s a really big thing for them and I’m in a privileged position where if I can help put smiles on their faces especially during difficult times then I want to do that.”

The school tweeted their gratitude for Mr Phillips’ appearance, adding:

“A huge thank you for being such an inspiring role model to our pupils.”

As part of the Premier League Primary Stars programme, coaches from the Leeds United Foundation work closely with the teachers and pupils at Christ the King Catholic Primary School along with many other local schools, using the power of sport and Leeds United to inspire pupils to reach their full potential and helping to increase engagement levels within education.

If you would like to take a look at the video of the Q and A with Kalvin Phillips, please click here.

Facebook
Twitter
Pinterest
WhatsApp
Previous articleMark’s History: Aviaries estate in Armley has a rich heritage and character
Next articleEnjoy winter gardening with this course at Hollybush