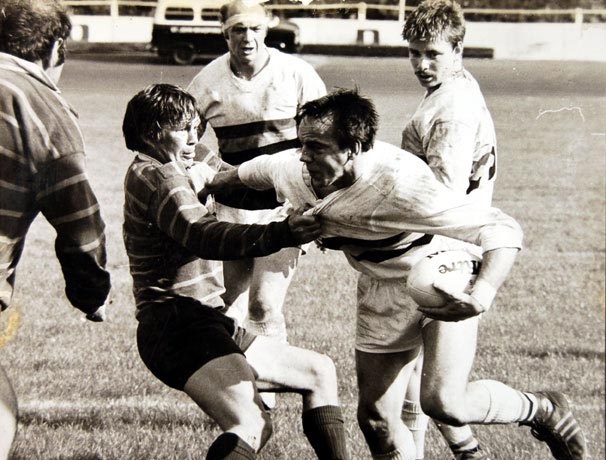 Having shone  playing in the amateur game in Leeds, Bramley quickly swooped to sign Graham Idle in 1969, writes Paul Abraham.

Nobody could have predicted when he made his debut as a substitute for scrum-half Horsman in a 9-22 home defeat against Keighley that Graham would finish his career after 740 professional matches over 24 years and nine clubs later.

After another three substitute appearances Graham started for the first time against Dewsbury in December when he played on the right wing in a 14-5 victory.

He finished his first season with 10 appearances as well as 7 from the subs bench, playing on both wings, full-back and loose-forward.

The 1970-71 season saw Graham establish himself as a first team regular and finished the season with 32 starts and 3 substitute appearances, again playing at full-back, left-centre, second-rower and loose-forward.

He scored his first two tries in a 35-2 thrashing of Hunslet at the famous Parkside ground and then added another try during a 13-5 home win versus Blackpool Borough.

The following season saw a try in a 27-11 victory at McClaren Field and one in a 11-46 defeat at Wilderspool against a rampant Warrington side.

Apart from a game at full-back in a 7-18 home loss versus Bradford Northern, Graham had now made the second-row position his preferred shirt.

He finished with 26 appearances and 10 from the bench in a season that saw Bramley defeat red-hot favourites Bradford Northern in the second round of the RL Challenge cup in front of a record McClaren Field attendance, before losing at home to Warrington in the quarter final.

Bramley started the 1972-73 season by winning their first four matches, which included Graham scoring a try in the 13-10 home victory over Batley.

A try in the impressive 13-9 home win against Wakefield Trinity was followed later in the season with the only Bramley try in a 7-13 defeat at York.

This season was to stat of a golden era for the club as they achieved a place in the following season’s new First Division by finishing in the top 16 to cement their place.

The 73-74 season will go down in Bramley history as their most successful in the professional game.

They lifted the BBC Floodlit Trophy for the first piece of silverware in 94 years of existence (defeating Wakefield away, Castleford and St Helens at home then travelling to cup kings Widnes and earning an historic win in the final).

They also reached the semi-final of the John Player Trophy, another highlight being a 17-13 Good Friday victory at Headingley to secure the place in the following season’s First Division.

Throughout the incredible season, Graham was one of the first names on the team sheet and played in 41 of the 42 first team matches played, only missing the 20-12 home win on Sept 15th against Hull in the first round of the John Player Trophy.

Graham crossed the whitewash five times during the season, including two in two games in December against Whitehaven at home – winning 21-12 – which was followed by a shock 16-14 win at Hull Kingston Rovers.

Had Graham been playing for a “big name” club then surely he would have been selected for the Great Britain tour of Australia at the end of the season especially after his Yorkshire county appearances.

The following season saw Bramley relegated in a disappointing season after the highs of the previous season.

Graham was, as ever, a shining light throughout the season with his colossal tackling stints. He played 34 times in a season, which brought him tries at home to Hull in the JP Trophy (won 15-6) away at Featherstone (lost 14-26) and in the home victories against Bradford Northern (21-5) and Rochdale Hornets (16-6).

The final match of the season, an 8-23 away defeat at Warrington on the 16th April, was to be Graham’s 201st and final appearance for Bramley before a record transfer fee was received for the Bramley club as Wakefield took him back in to the top division where he deserved to be.

While Bramley fans were saddened to see him leave they hoped he would finally get the recognition and honours he deserved for his loyalty and tireless efforts for the club.

But this wasn’t the end of his Bramley career as he returned to play in the final nine matches of the 1986-87 season making his return in the 1-5 home defeat to Rochdale on the first of March.

Graham brought the curtain down on his Bramley career when he played in the play-off defeat at Swinton on 26th April.

Graham appeared in the 1979 RL Challenge Cup final for Wakefield as they lost to Widnes and then a move to Bradford brought him a Championship winner’s medal and two Yorkshire cup runners-up medals.

He is in fifth place on the list for the most Rugby League appearances in a career and is still highly respected throughout the sport of Rugby League.  A true legend not just for Bramley but in Rugby League.