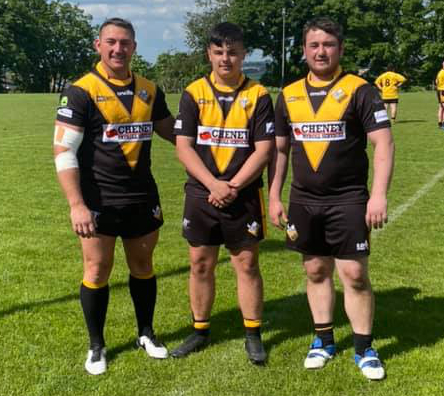 For the first time in the club’s history, to our knowledge, we had four members of the same family on the field at the same time.

With brothers Craig and Andy Boot, Craig’s son Jack, and Andy’s stepson Kieran all taking the field in the game against Wibsey.

The Buffaloes started the game brightly and were on the attack from the off. In the fifth minute they had an excellent opportunity to open the scoring, but the chance passed by with a mistake.

Two minutes later, the home side opened the scoring when one of the attackers broke through the defensive line/ They put a chip over the fullback, and a race for the line ensued, with the Wibsey player scoring an unconverted try, giving them a 4-0 lead.

In the 13th minute, Wibsey crossed the line again following a string of penalties awarded to them, and the pressure told when they crossed the line for their second try of the game, this time converted, extending their lead to 10-0.

Three minutes later and the Buffaloes opened their account when on the back of some sustained pressure, Craig Boot looked up from the acting half, spotted the smallest gaps, and squeezed his way over the line. The reliable Tom Jenkins was on target with the conversion. This narrowed the lead to 10-6.

In the 19th minute, the Buffaloes thought they were over the line again when prop Andy Boot floated a cross-field kick above the defenders, but the ball bounced away from winger Kieran Foster-Matthews.

Three minutes later and Craig Boot crosses the line again for his second try of the game. The Buffaloes were awarded a penalty for a High Tackle, and the ever aware Craig spotted an opening, tapped the ball to himself and was over for the try. Jenkins was on target again with the conversion, giving the Buffaloes the lead 10-12.

In the 31st minute, with Jack Boot on the field and taking over at Hooker, a rapid play of the ball enabled him to shoot it out to Kieran McFarlane. He put up a high bomb; the home side’s defence couldn’t regather the ball, and Buffaloes Fullback pounced on the ball for a try converted by Jenkins, extending the Buffaloes lead to 10-18.

Sadly, the game was brought to an abrupt halt following a severe injury to one of the Buffaloes players, resulting in the match being abandoned.

The Buffaloes would like to thank the Wibsey Medical team, the Wibsey club, the Ambulance service and everyone else who helped look after the injured player.