Bramley Buffaloes seconds run out winners despite the heat 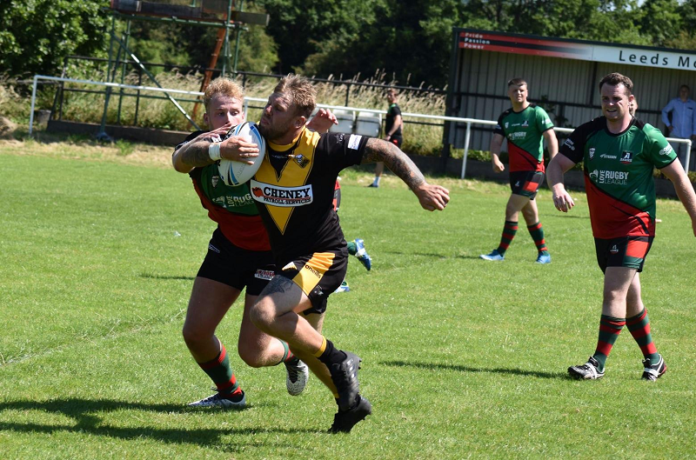 On a sweltering afternoon in Leeds, Bramley Buffaloes second team travelled to Old Modernians to take on the Leeds Akkies ‘A’ in the Yorkshire Men’s League Merit League.

The Buffaloes had four first-teamers in the squad, who needed a run to keep up their fitness levels after having no game for a few weeks.

The game started with both teams challenging each other to see who would get the upper hand, going set for set with each other punctuated by the referee stopping play from allowing water onto the pitch to ensure that the players were hydrated.

In the 12th minute, the Buffaloes, on the back of several repeat sets of six, scored their first try of the afternoon. Michael Emmett crashed over, with second team captain and top points scorer Tom Jenkins adding the conversion, giving the Buffaloes the lead 0-6.

Six minutes later, the Akkies broke away from the Buffaloes defenders to score out wide for an unconverted try. This made the score 4-6.

On 26 minutes, Emmett scored his second try of the game. A great break from winger Henry Sedgwick lead to a repeat set, and the big prop crashed over the line for the try, which was again converted by Jenkins.

Two minutes later, and the Buffaloes were over again; this time, bustling prop Lee Harper broke through the defence, swotting off defenders, and on his left shoulder was club captain, Brad Wilson, who had an easy run to the line. Jenkins was off the field taking a well-earned rest, so scrum half Kieran McFarlane stepped up to add the conversion. Making the score 4-18.

In the 32nd minute of the game, McFarlane scored a try after bamboozling the defenders twice with outrageous dummies. He added the conversion, making the score 4-24.

The score remained the same at the half-time break. At half-time, the team talk was all about defending well as the opposition came down the slope as the team didn’t want a repeat of the Queensbury game.

From the kick-off, the Akkies fumbled the ball, and the Buffaloes were on the attack again. On the third tackle, the ball was spun out wide, and full-back Harry Walker went over in the corner for an unconverted try. This extended the lead to 4-28.

Before the hour mark the Buffaloes were in again when Connor Booth broke free of the defensive line and steam up the hill drawing the Akkies’ fullback before passing the ball to Lochlan McGill, who crossed under the black dot. Jenkins, who was back on the field, added the conversion, making the score 4-34.

In the 64th minute, Tom Langton stormed over the line after a spell of sustained pressure, with Jenkins adding his fourth conversion of the game, taking the score to 4-40.

The Akkies, by now down to 12 men on the field, scored the last point of the game. Full-back Walker lost the ball in the sun as it was coming down to earth from a high bomb, and the Akkies squeezed themselves in at the corner for their second try of the game, making the final score 8-40.

Facebook
Twitter
Pinterest
WhatsApp
Previous articleThree quarters of Leeds adults vaccinated – but 40,000 vulnerable people yet to have a jab
Next articlePudsey youngster in running to become Leeds Children’s Mayor