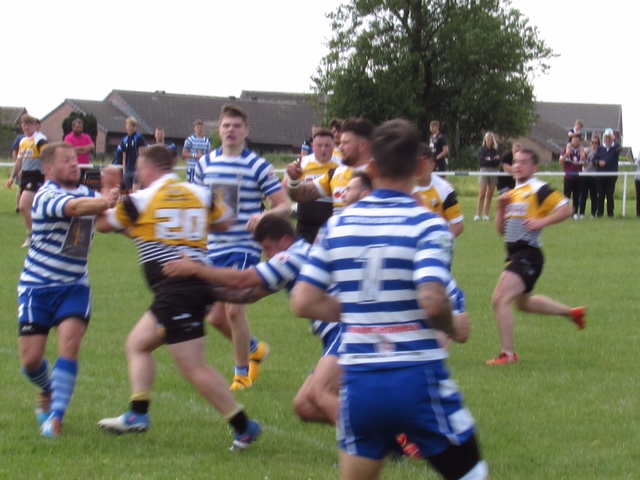 In a hastily arranged game, after Silsden Storm cancelled on us, Bramley Buffaloes’ second team travelled to Queensbury, up on the hills, to take on their third team.

As the cliche goes, the game itself was a game of two halves, with each dominating a half, and not surprisingly when both were going down the slope.

The Buffaloes won the toss and captain, Tom Jenkins, decided that we would go down the hill in the first stanza.

For the first 14 minutes it was a pretty evenly matched game with both teams having equal possession trying to find the opening.

This opening came in the 14th minute when the Buffaloes markers were slow to react, and the Queensbury players sneaked through the resulting gap for a converted try, giving the home side the lead 6-0.

Between the referee awarding the try and the conversion being kicked, outstanding prop Andy Boot suggested to the referee that there was an element of obstruction in the lead up to the try.

The referee was having none of it and dispatched Boot to the sin-bin, telling him that there was no such rule in the rulebook. This wasn’t our first rodeo with the referee.

Three minutes later and the Buffaloes levelled the score when, on the back of a repeat set of six, scrum-half Kieran McFarlane crossed the stripe with Jenkins adding the conversion, levelling up at 6 all.

As the players lined up for the restart, the referee indicated to the Bramley coaching team that Boot could return to the field, the shortest sin-binning on record.

In the 20th minute, Kacper Mroz broke through the defensive line, putting in a deft chip over the defenders, regathered his own kick, and passed the ball to Connor McGill, who scored out wide. Jenkins was successful with the conversion again, giving the Buffaloes the lead 6-12.

On 24 minutes Billy Butterworth raced away from the defenders to score his first try of the afternoon. Jenkins was on target again for the conversion, extending the Buffaloes’ lead to 6-18.

Three minutes later, substitute Liam Lether chipped the ball over the defenders, regathered the ball and skipped away for a try. Jenkins was on target for the fourth time, taking the lead to 6-24.

Two minutes out from the break, McGill had the ball in hand and put in a kick out towards the right-wing, where Butterworth collected the ball and beat the defender to score his second try of the game. Jenkins was again on target, making the score 6-30.

While the Buffaloes dominated the first half, the second was dominated by the home team. They were invigorated by the slope, and six minutes into the second half one of the Queensbury players broke through the defenders and raced 50 metres for an unconverted try, bringing the score to 10-30.

In the 53rd minute, the home side were over again. When the Buffaloes made a mistake on their goal line. The Queensbury player claimed the ball and crossed for the easiest try of his career; this was converted, taking the score to 16-30.

In the 68th minute, with the Buffaloes, defenders were tiring and dropping off tackles, allowing one of the Queensbury players to cross for their third try of the second half. This went unconverted, making the score 20-30.

Buoyed by their comeback, the home side thought they were in with a sniff of a win with 10 minutes left on the clock and only two scores behind.

The home team set about their task with gusto, finding extra energy from their reserves, and the Buffaloes defend resolutely, repelling attack after attack.

With four minutes of standard time left to play the Buffaloes had a rare trip into the Queensbury 20-metre zone, and a quick pass to McGill from the ‘play the ball’ allowed him to coolly slot over a drop goal, making the score 20-31.

This seems to take some of the sting out of the home side’s tail. Whilst they were still two scores behind, the drop goal against the run of play seemed to have broken their spirit. They didn’t give up on the task, but time was against them. And they were on the attack when the referee blew for full time, leaving a relieved Buffaloes team the victors by 20-31.