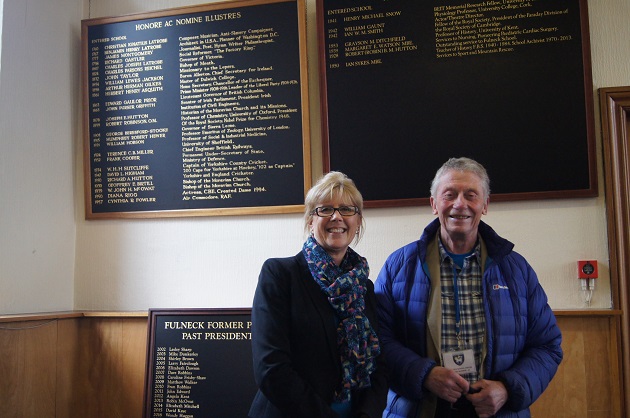 The architect credited with planning Washington DC and designing parts of the White House in America has been named Fulneck School’s greatest-ever pupil.

Benjamin Latrobe, who entered Fulneck, Pudsey, in 1767, was the resounding winner of a vote by current pupils who chose from a list of famous alumni that included a former Prime Minister, a Bond girl and a social reformer.

The runner-up in the poll, held as part of the ‘Fulneck’s Greatest’ event, was actress Dame Diana Rigg, who appeared in the James Bond film ‘On Her Majesty’s Secret Service’ and starred in the 1960’s TV series The Avengers. More recently Ms Rigg played Lady Olenna Tyrell in Game of Thrones and made an appearance in Doctor Who alongside Matt Smith.

In joint third place were Henry Herbert Asquith and Richard Oastler. Mr Asquith was British Prime Minister from 1908 until 1916 and Leader of the Liberal Party from 1908-1926.

Richard Oastler was a prominent social reformer who campaigned tirelessly for the 10 Hours Factory Bill (leading to the Factories Act of 1847) which earned him the title ‘The Factory King’.

Other illustrious names on the short list included Sir Robert Robinson who received a Nobel Prize for Chemistry in 1947 and Terry Miller, Chief Engineer for British Rail who, amongst many achievements, devised plans for the InterCity 125 passenger train.

The credentials of each of the candidates were presented to the audience of pupils and staff by groups of students before the secret ballot took place.

The event was organised by Fulneck’s Head of Pastoral Care Rob Potts who said:

“The real purpose of the event was to demonstrate to current pupils that through hard work and ambition you can achieve great things. Most of the people on the list including Benjamin Latrobe had to overcome difficulties to achieve what they did in their chosen fields and should serve as excellent role models.

“The pupils who stood up in the packed church and talked about their chosen candidate are also to be congratulated, particularly our international students for whom English is not their first language. They all did a great job.”

The keynote speech was delivered by another former pupil, Ian Sykes MBE, who attended Fulneck between 1950 and 1959 and was returning for the very first time. A keen climber, Mr Sykes has spent 40 years in mountain rescue and has written two books, In the Shadow of Ben Nevis and Cry Argentina, a semi-fictional account of the lead up to the Falklands War.

“It was lovely visiting the school after all these years and a host of memories came flooding back. To find that my name had been added to the board featuring notable former pupils capped a truly memorable day.”