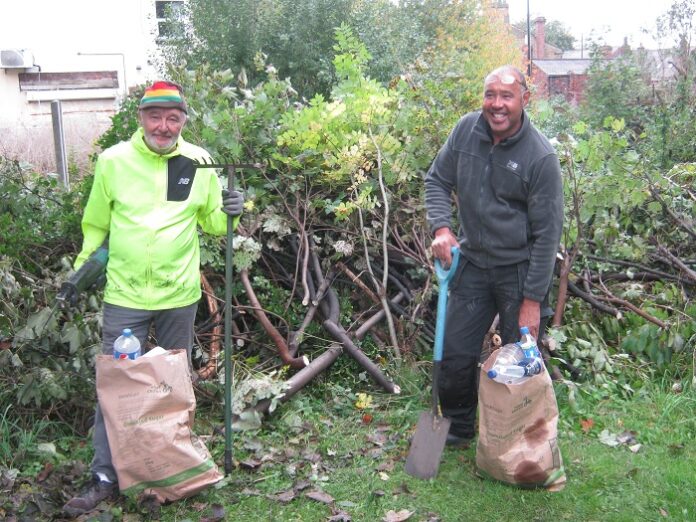 A patch of land opposite the former Real Junk Food cafe at the end of Chapel Lane had become an overgrown copse of trees and bushes.

Foliage had grown out on to the pavement inhibiting the passage of wheelchairs and prams.

The undergrowth provided a haven for street drinkers and drug addicts.  It had also recently become an informal toilet area for people unable to use the library facilities which have been closed to public use during the coronavirus outbreak.

Volunteers at Leeds City Mission, who are currently renovating the ‘Mission Room’ just a few yards away, sprang into action to address the problem.

In recent weeks they have been tidying the grassed area around the ‘Mission Room’. Cans and bottles have been picked up. Tree saplings and roots adjacent to the building have been dug out.

Much-needed help has been provided by the Urban Task Force based at New Wortley Community Centre.

The team of five volunteer environmental workers blitzed the grot spot recently.  Tree branches were cut down, bushes were removed.  Hundreds of discarded glass bottles, beer cans and plastic were picked up and recycled.

Leeds City Mission Development Worker Andy Dalton praised the team and other volunteers for all their hard work. The dense foliage had become a magnet for illicit activities. The removal of the undergrowth and piles of rubbish meant that the area was clearly visible, looked much better and had improved personal security.

A big ‘thank you’ for all those who have made such a positive difference to what was a complete eyesore.

Volunteers working for Leeds City Mission are now focussing their efforts on internal building work in the ‘Mission Room’.

They hope to complete their task by Christmas. The renovated premises will host a variety of social projects which will help people impacted by poverty, unemployment, isolation and marginalisation.