It’s hard work any year, but this year has had its challenges with the cold, wet spring, then the baking heat of the summer and never-ending watering. Of course it’s worth it to have fresh, organic fruit and vegetables, nothing in the shops even comes close in freshness or flavour.

For some allotmenteers, the harvest means showtime. Each village has its own show, a long tradition, in the case of Calverley it was the 97th and growers, bakers and handicrafters take it very seriously.

Some have part of their allotment dedicated to show vegetables which are lovingly cultivated, tape measures are usually at hand to keep track of size, or to make sure beans and beetroots are the same size and circumference. 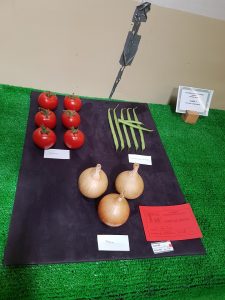 It’s important, the judges look for uniformity and shininess, they are also sticklers for correct quantities, I witnessed more than a couple of entries given a slip of paper with the dreaded word ‘disqualified’ because there were five beans instead of four.

Personally, I can’t be bothered, I just grow to eat, but there is a great deal of pride taken and skill on display at these shows.

I did enter my cucamelons, though. Having gone to the trouble of growing them and not being prepared to eat them after tasting one, I thought they’d be a novelty in the ‘other vegetable’ class, though I did consider putting them in the ‘other fruit’ class because technically that’s what they are.

As it turned out, I should have put them in the fruit class as someone else did and theirs won. Mine got nothing, which just about sums up my cucamelon experience, I won’t be growing those again.

I get to judge the photography and the wine at the show. Wine was an add-on to my tasks after the previous judge said they weren’t prepared to travel from York for a couple of bottles of home brew which weren’t going to put the frighteners on France’s finest vintners, or indeed on anyone who liked good wine, so I agreed to judge.

I’ve done it for a few years now and in a nod to changing tastes, there’s a new class for flavoured spirits. This year the winner was a blackberry brandy, which was so delicious, I investigated how easy it was to make, it turns out it’s very easy.

All it needs are a couple of Kilner or other lidded jars, 3-400g of blackberries, which are plentiful in the allotment or anywhere else at the moment, half that amount of sugar and a cheap bottle of brandy.

Stick them all together, shake each day for a couple of weeks then once a week for three months and there you have it, blackberry brandy for Christmas. I’ve even had a go at golden raspberry gin, made in a similar way, I predict it’s going to be a very good Christmas!

With much of the vegetables now harvested, there’s bare earth to be used.

I have purple-sprouting broccoli, kale and winter greens to plant, they’ll grow nicely over the winter and don’t mind the cold and frost. I could maybe even have some with Christmas dinner. That and the blackberry brandy.