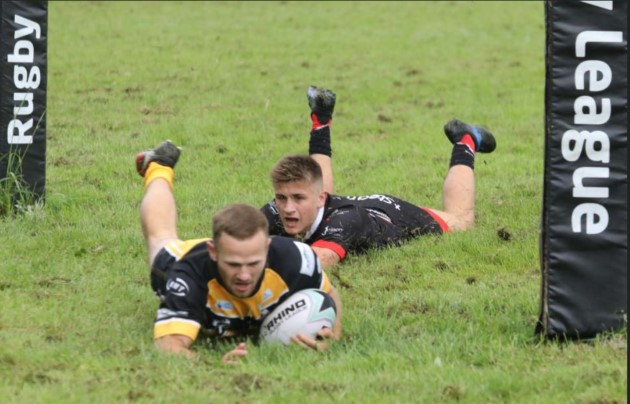 On a cloudy but warm Saturday afternoon, the Bramley Buffaloes welcomed the New Earswick All Blacks for their first visit to Bramley for this Yorkshire Men’s League Premier Division Clash, writes Martyn Cheney.

The crowd was slightly smaller than usual, affected by the rain that had fallen in the hours leading up to the game. Those who were at the ground witnessed the Buffaloes charge past the All Blacks, playing three-quarters of the game with only 12 men, after the returning Tom White was sent off for an alleged punch.

The Buffaloes welcomed back Tom White back for his first game of 2018 and had Xavier Martin on debut at prop. But had Kyle Briggs and Craig Boot missing from the squad, after both suffered season-ending injuries last time out against East Hull.

From the off the All Blacks were on the attack on the back of several soft penalties. But in the fifth minute, the Buffaloes mounted their first attack, the returning Tom White, broke through the defensive line and fed the ball to Full Back, Peter Croft, who sprinted away for the first try of the game. Which Connor McGill was unable to convert, making the score 4-0 to the home team. 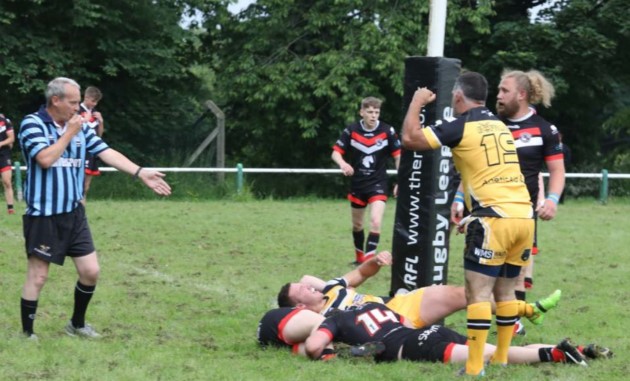 In the 14th minute, Buffaloes Man of the Match, Aidan Baranyi, collected the ball in the Buffaloes 20-metre area, and went on a dazzling run, beating player after player to score under the posts. McGill was able to convert the try this time from in front of the posts, making the score 10-0.

Five minutes later, the All Blacks opened their account, when second rower, George Hunt broke the Buffaloes line to score a try, which Winger Harrison Todd, converted, reducing the Buffaloes lead to 10-6.

In the 22nd Minute, Peter Croft collected a great pass and scooted over the line for an unconverted try, increasing the lead to 14-6.

Two minutes later and the referee had a mad two minutes, firstly dismissing Tom White for an alleged punch to the head, and then sin-binning captain, Brad Wilson, for questioning the decision. Subsequently, the referee claimed the team were on a warning, and he had no choice but to send off White.

The All Blacks tried to take advantage of their two-man advantage, but the Buffaloes’ scrambling defence was too strong. Veteran prop, Ryan MacDonald, ran his blood to water, putting in some big hits, and inspiring the rest of the team.

Just before Wilson returned to the field, Nathan Hammond, strode through and over some defenders, before drawing the fullback and feeding the ball to McGill, who scored under the posts, before converting his try, extending the lead to 20-6.

On the stroke of half-time, hooker, Cameron McLachlan dived between the feet of the defenders to score from acting half back. Hammond stepped up to take the conversion and hit the upright. The score at half-time 24-6.

Four minutes into the second half and Kieran Hudson had a try disallowed for a knock on over the line, as the players were coming back to the 20-metre line for the restart, hooker McLachlan, got tangled up with one of the All Black Players and was sin-binned for obstructing the restart.

In the 48th minute, despite being down to 11 men. the Buffaloes had a sustained period of pressure in the All Blacks’ 20-metre zone, culminating in an unconverted try for centre Kieran Hudson, making the score 28-6.

Three minutes later, the debutant, Xavier Martin, broke free of the despairing tacklers, to cross for his first try for the club. McGill cooly converted in front of the posts, making the score 34-6.

In the 53rd minute, All BLacks standoff Connor Calam went to the sin-bin. From the resulting penalty the Buffaloes went on the attack and crossed the line, but the referee decided that the ball had been bounced in the act of scoring and disallowed the try.

On 61 minutes flying winger, Kieran Foster-Matthews raced 35 metres to score a try out wide on the clubhouse side of the ground, McGill added the conversion, making the score 40-6.

Four minutes later and Curtis Sidebottom, scored his first of the afternoon, following a good move by the Buffaloes which saw the ball go through many pairs of hands to score just to the left of the posts.  McGill was again on target with the conversion, making the score 46-6.

In the 73rd minute, Sidebottom was over again, bursting through the hapless defenders before skipping through the fullback in the in-goal area to ground the ball under the black dot. McGill was again on target with the conversion making the score 52-6.

“I’m pleased with the performance today, the lads gave their all and kept at it to the end.

“There were some strange decisions from the official, but we overcame those and stuck to the game plan. All credit to New Earswick, the didn’t give in, with a very young team, and they will bounce back from this in their next game.”

The Buffaloes are next in action on the 16th of June when they travel to Siddal.

Men of the Match: