Residents are being encouraged to make a difference and take part in a day of action to clean-up around Farnley Reservoir and help restore it to its former glory.

The event will see local residents litter pick and help tidy and improve the area around the reservoir on Friday, August 31. 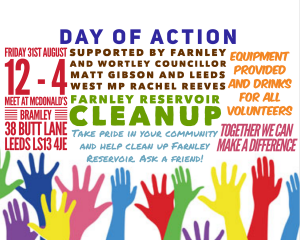 “We know more needs to be done to clean and keep on top of #Farnley Reservoir. But a huge turnout on August 31 will show local businesses in the area and Yorkshire Water how serious the community is about restoring the reservoir to its former glory. People power works. Join us.”

The clean-up runs 12pm-4pm. Meet at McDonald’s on Butt Lane.

A campaign to make Farnley Reservoir safer by Armley resident Daniel Riley has also proven successful, with more danger signs and fencing installed around the area.