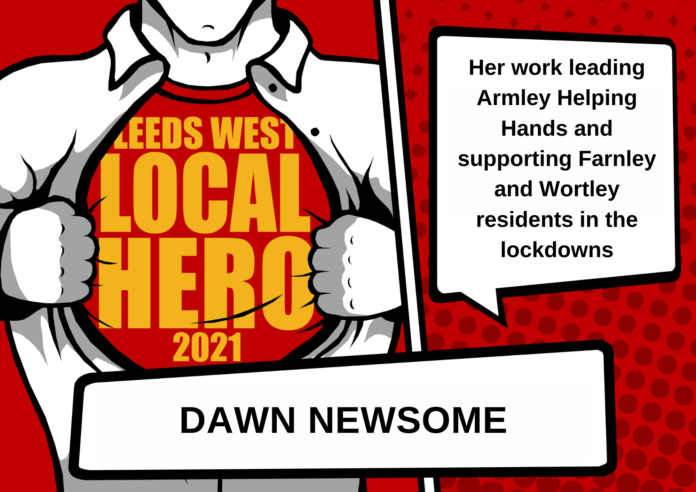 An Armley worker has been hailed a ‘unsung hero’ in this week’s Leeds West Local Heroes competition run by Rachel Reeves MP.

Dawn Newsome is one of the guiding lights behind Armley Helping Hands which has supported the elderly throughout the lockdowns, and is continuing to do so.

Dawn was nominated as Volunteers of the Year by Cllr Alice Smart (Armley) on behalf of her fellow ward members.

In her nomination, Cllr Smart said:

“Dawn Newsome and the team at Armley Helping Hands have worked tirelessly over the last 18 months to support those in need in Armley and Farnley and Wortley wards.

“Their work and effort has benefited these communities immensely, and I am pleased that they can get some recognition for this. Dawn deserves an extra round of applause for continuing to work for the good of the communities while recovering from a serious car accident.”

“I am delighted to be able to award this to Dawn Newsome in recognition of all the work she and her team have done over the last 18 months. Organisations such as Armley Helping Hands do great work, and those involved in the group are assets to our community.”

Armley Helping Hands has provided a range of support and services to older residents, including running a fish and chips club and supporting people by delivering emergency food parcels and prescriptions.

If you require assistance from Armley Helping Hands, then please contact them on 0113 279 9292.