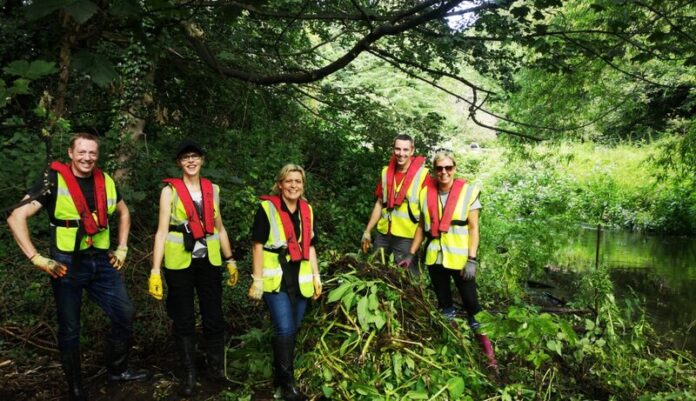 A popular West Leeds volunteering programme will be returning to the Kirkstall and Burley area later this month following a pandemic pause.

Open Source Arts is inviting volunteers to work together clearing banks at the River Aire and Leeds & Liverpool Canal by facilitating the Team Kirkstall group, which was formed after the cleanups after the devastating 2015 Kirkstall floods.

These volunteer days are an opportunity for people to connect with their local environment, to improve access to nature for themselves and for others in the community, and to build existing and new friendships.

“Not only has volunteering with Open Source Arts given me the opportunity to positively impact my local community, but the guys have been incredibly friendly and welcoming.”

There will be a series of five volunteering days on Saturdays from later this month.

Following the Boxing Day floods of 2015, Open Source Arts became a hub for volunteers who wanted to participate in clearing up the damage done, and reducing the risk of similar floods in future.

This became an ongoing commitment to preserving and improving the environment around  the organisation’s base on Kirkstall Road.

In May 2016 Team Kirkstall river cleanups started, with around 65 people removing over eight tonnes of waste from the River Aire and its banks.

Several cleanup days followed each year up till 2019. The days were  expected to resume in 2020, but in the end it was decided that such group activities couldn’t be run in a way which was Covid-safe, complied with government guidance and felt safe enough for volunteers.

Volunteer work can include creating and maintaining access paths, litter picking, and clearing debris. All necessary equipment will be provided.  At the end of the day, volunteers are treated to light lunch at a local eatery, as a token of thanks.

A volunteer on a previous clean-up added:

“It was great being able to see how much of a difference we made by seeing how much rubbish we took from the river and how the area had changed so much when we were finished.”