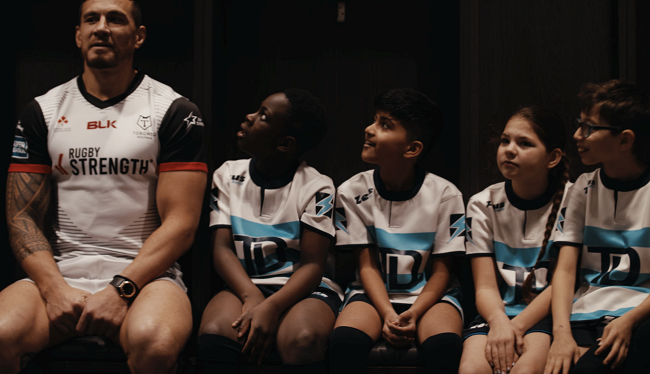 Schools from across West (and North) Leeds came together at Headingley Emerald Stadium to celebrate the launch of the new Super League Season, writes Jo Fiddes.

The event itself gained national coverage, with news reports on Sky, BBC and ITV.

After meeting their sporting heroes, they then had the opportunity to play a series of friendlies against other schools on Headingley’s hallowed turf.

“This was a once-in-a-lifetime opportunity – the children got to show their rugby skills both to the media and to the professional players. The fun tag rugby event was played with great sportsmanship and something we will all remember for a very long time.”

Children from Castleton Primary School have even more reason to remember this event.

After being partnered with Toronto Wolfpack (pictured in the main photo at top of this page), they had a changing room opportunity to interview a rugby legend – Sonny Bill Williams.

“The confidence the children showed both on the pitch and in the changing room when they interviewed one of the most famous rugby players in the world, was just amazing. A really proud moment for us all.”