We want our Bramley back! Residents outline vision for future 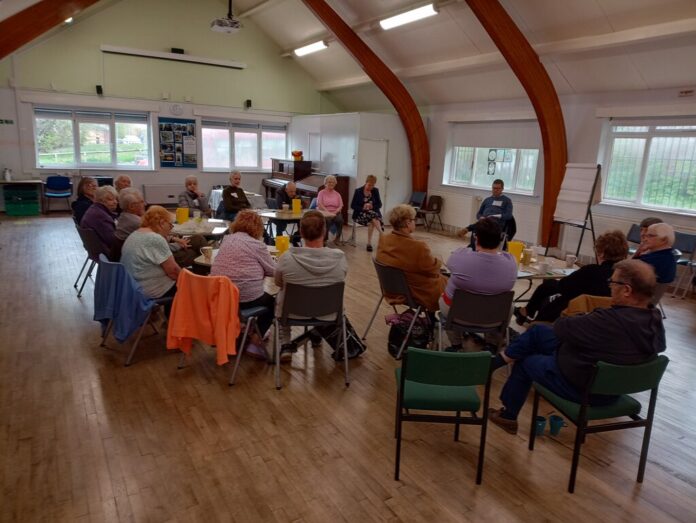 We want our Bramley back! That’s the message from Bramley residents who have set out their vision for the future of the shopping centre and town street areas.

More than 20 people attended a ‘great debate’ regarding the future of Bramley, which was led by Bramley Elderly Action’s Joanne Hartley and chaired by West Leeds Dispatch editor John Baron.

The discussion was open to anyone in the area to reflect on the changes to Bramley Town Street in the 1970s, to consider the effect this had on the community and to talk about how Bramley centre could be improved in the future.

The meeting, at Bramley Community Centre, heard how Bramley’s main shopping area used to be full of small, independent shops such as butchers, bakers and shoe shops – but the independent feel was now missing. More than one person suggested the current shopping centre should be pulled down to be ‘started again’.

The meeting looked at people’s memories of Bramley in the past, present and encouraged ideas for the future.

Concerns were expressed about anti-social behaviour from some young people and the need for more youth activities – but it wasn’t all doom and gloom, some still said Bramley had a friendly community spirit and that some things had changed for the better.

One attendee said: “Bramley was never pretty to look at, but it was an industrious place, where people worked hard, where trades and factories flourished. It all started to go downhill in the 1970s. It had butchers, bakers and a shoe shop where you could be dress shoes. Lovely greengrocers and fishmongers, but that lack of small independent firms has now led to a lack of independent shops.”

Another attendee criticised Bramley for its ‘scruffiness’ and the need for more police presence. Problems with anti-social behaviour from young people, particularly at the back of the centre on an evening, was also raised.

There was also lengthy discussion on the importance of more facilities for young people and how to get them interested in the activities.

Councillor Caroline Gruen (Lab, Branley & Stanningley), who attended the meeting, said the issue wasn’t a lack of youth facilities, it was getting youngsters interested in attending the existing facilities that was the real challenge.

Another attendee blamed the supposed high rents on the lack of small businesses, at the ‘depressing’ brutalist shopping centre which she suggested should be ‘knocked down and started again’.

But the changes to Bramley over the years have received some support. One attendee said Bramley wasn’t Chapel Allerton and felt there weren’t enough affluent people to support independent shops, such as cheesemongers.

“I’m not sure that they are viable,” he added. “And it was a good thing to pull down a lot of the old buildings on Town Street in the 70s because a lot of them weren’t fit for habitation. The bank buildings were in excellent condition but it was claimed at the time that they weren’t viable to save.

“Things needed to change. People in 1960s Bramley still had outdoor toilets and they needed to be fit.”

There was praise for community initiatives like the war memorial – and for the peace garden plans being led by young people at the back of Trinity Methodists, as recently reported by WLD.

Another attendee said Bramley’s fortunes needed turning around. She added: “We want our Bramley back.”

Ideas included the need for more community events to bring people together and for new groups including setting up a Bramley in Bloom group and a Friendship Society.

It was also suggested that mobile and selling things like fresh fruit could travel around Branley’s streets, selling goods directly to customers.

It was suggested that older BEA members had the experience and local expertise to come up with some of the solutions to the area’s problems.

A follow-up meeting to plan the way forward and discuss how some of these ideas could become a reality will be held in a few months’ time.