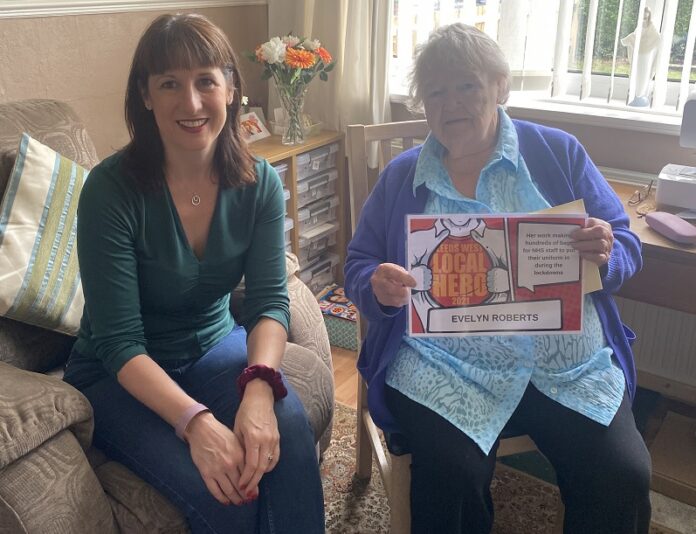 Two volunteers who made washing bags for NHS staff during lockdown have received a community award from Leeds West MP Rachel Reeves.

Evelyn Roberts and Jean Smith were nominated by the charity Hawksworth Older People’s Support (HOPS) for their hard work.

Ms Reeves invited members of the public to nominate people who have gone above and beyond and enriched their local community through acts of kindness and generosity.

Susan, from HOPS, who nominated the pair, spoke of their hard work creating these bags and how they made hundreds as a gesture of appreciation for our NHS workers.

Sadly, Jean has recently passed away, however this award has been posthumously awarded to her in recognition of her hard work to support our key workers. Ms Reeves said:

“Evelyn and Jean are worthy winners and embody all that is good about the people of West Leeds. I want to thank Evelyn for everything she has done for our community and for our key workers, and my condolences are with Jean’s family and friends at this time.

“There has been a wonderful response to the West Leeds Local Hero Awards. We have had lots of nominations so far, representing a whole range of individuals and organisations. But the nominations are still open until Friday.”

If you know a local hero you think deserves a shout out, please contact my office on rachel.reeves.mp@parliament.uk and let us know why you think they deserve this recognition.”