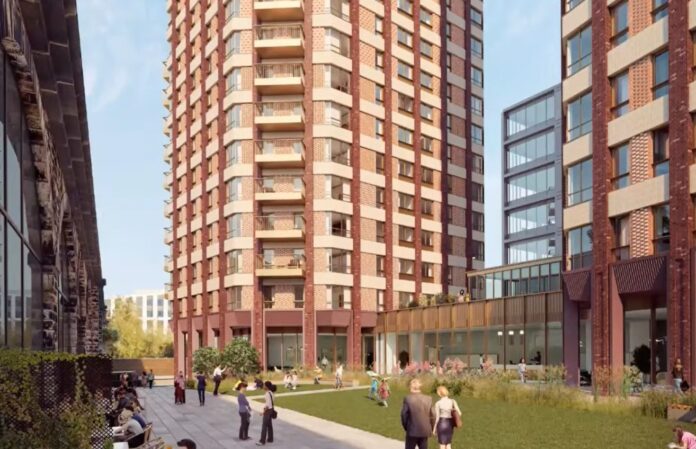 Leeds planning chiefs have discussed early plans to build two large towers at the west end of the city centre, with developers providing an early artist’s impression of how the site might look.

A Leeds City Council plans panel hearing discussed a pre-application for two blocks of 26 and 31 storeys, which would be built on the former Doncaster Monk Bridge Works in Whitehall Road.

The development, which would include around 498 flats, also includes space for green space and cycle parking.

According to a Leeds City Council report into the plans, the two towers would be linked via a “double storey podium”, and would include rooftop amenity space for residents. Parking for 22 cars and 372 bicycles would also be included at the basement level.

During a meeting of the council’s City Plans Panel, Coun Graham Latty (Con) criticised the choice to include only 22 car parking spaces, but 372 bicycle parking spots, adding:

“How did you arrive at that? I know that we as a council would like to see cars banished forever, but in the real world, people do actually use cars. I wonder if space for 22 cars is practical.”

A representative from the developers said:

“This is an enormously sustainable location in the city. If this site cannot be a low car site, I struggle to see where we can put one.

“We are proposing a lot of bicycle spaces because if you don’t nobody is going to cycle. Something has to come first, it’s either the infrastructure or the bicycles, and this is a move to encourage people to cycle more.”

“In Leeds we are looking at a much more London-type model of public transport, which is 30 years overdue, but we are going to get there.”

Coun Ryan Stephenson (Con) questioned whether there was much of a market for city centre living, adding:

“The part of the city I represent has seen an exponential rise in house sales recently, and the data behind that shows that it is everybody fleeing from the city because they want access to outdoor space and amenity.
“Will there be a demand for units without outdoor spaces of their own, given we have seen the rise?”

“We need to design homes of the future and external space, but that can be shared. We don’t want to create homes where people live in isolation and loneliness. There is still work to do, but there is demand, and a lot of demand in Leeds City Centre.”

The council document also said the applicant proposes to meet the requirement for affordable housing provision in the area – meaning around 34 of the flats would be available for 20 per cent under local market rates.

Members of the panel agreed that they supported the principle of building on the site.
No decision was made on the plans, as more detailed blueprints are set to be submitted in the coming months.