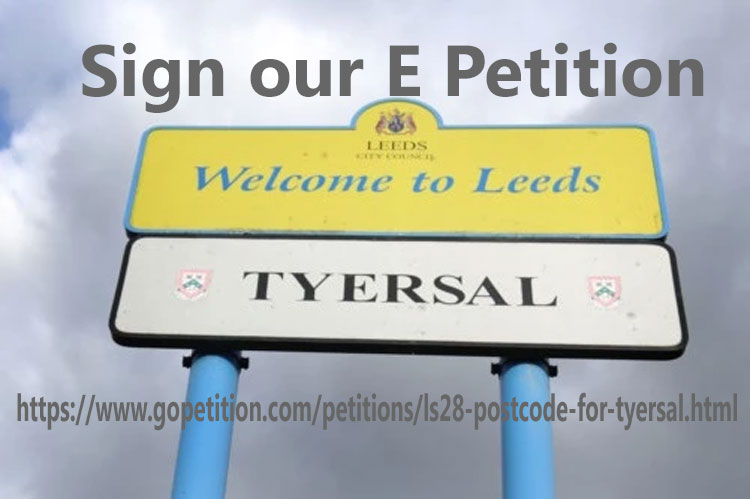 The forum was well attended at least twenty people turned up on a cold, wet evening. There were various issues discussed for example, an update about the Tyersal estate postcode campaign, fly tipping, planning issues, speeding cars, dog signs, and damaged grass verges.

Some of the issues concerning Tyersal residents are the postcode and crime. Tyersal estate resides within the Leeds boundary and the residents pay Leeds Council tax, but have Bradford postcode.

This is a big problem for Tyersal residents. For example, car insurance is a lot higher, house prices are evidently lower and policing the area has been problematic over the years. Pudsey councillors have approached the Post Office but had little success.

As a former resident of Tyersal, policing has been a problem for number of years. For example, at the forum a lot of the residents had number of police-related issues to discuss.

Unfortunately no police turned up, not even a PCSO, which in my mind was a total lack of commitment towards neighbourhood policing. The forum was well advertised, the police were emailed at least three times about the forum date and venue by Harpreet Singh, Leeds Council Area Community Officer.

Because of lack of police presence at last night’s meeting a resident may write to the Police Commissioner and Chief Superintendent about the apparent lack of neighbourhood policing for Tyersal estate.

It was reported that Pudsey councillor Mick Coulson has raised this issue recently with the Area Community Chair’s Committee about how neighbourhood policing has declined in recent years, not only on estates such as Tyersal but in communities across Leeds.

The meeting concluded with the residents thanking meeting chair Cllr Josie Jarosz (Lab, Pudsey) for her 25 years of public service.