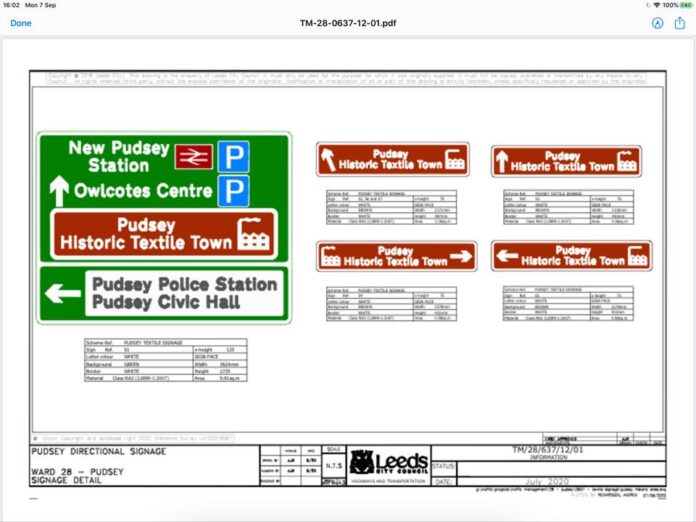 The change is the idea of Pudsey councillor Trish Smith (Cons), who says the ‘historic market town’ tag is factually incorrect and “misses the mark”. The council is set to bring in the new signs in November and Cllr Smith said:

“Since being elected, I’ve been working on righting that wrong and paying proper respect to our established heritage.

“I’ve worked with Pudsey & District Civic Society, council officers and my fellow ward councillors to ensure Pudsey can now retake its rightful place as an ‘Historic Textile Town’ – one of the foremost textile towns in the old West Riding.”

Cllr Smith said there are records of textile manufacturing in West Yorkshire, with the industry growing from the 13th century onwards, when textile manufacture was a simple but effective supplementary income to subsistence farming. She added:

“Textile manufacture is identified as the main source of income for two thirds of Pudsey townsfolk from 1700 onwards. Pudsey was part of the Coloured Cloth Region, supplying the economically important Leeds Coloured Cloth Trade, and also as far away as London.”

This export trade would grow to become a significant global concern. Of the 15 towns supplying the textile markets of Leeds, Bradford and Halifax – Pudsey was considered to be the main manufacturer.

“Currently we still have one of the original mills still operational in Stanningley, and exporting the highest quality material worldwide: AW Hainsworths hold a Royal Warrant and supply uniform cloth for both the Royals and the Guards Regiments.

“By comparison Pudsey Market does not have any historical significance for the town until well into the mid 19th century, when people’s lifestyles became less self sufficient and were being dominated by manufacturing industries.

“Whilst very important to the way we see Pudsey today, our market has never enjoyed the regional significance of other local town markets such as Otley, Morley and Wetherby.

“Pudsey’s high street and market played a big part in supporting the community during the recent lockdown, and remains a vital resource for many. Although Pudsey market was initially borne out of necessity, we need to continue to support it to ensure it thrives for years to come.”