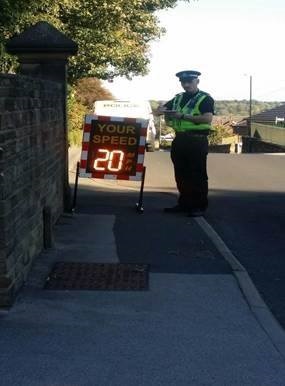 A police clampdown on speeding drivers in Pudsey has led to 33 warnings being sent out.

Officers have been working in various locations in the Pudsey area in the past fweek conducting speed checks, including the problem area of New Street.

Of the 98 vehicles which were checked 33, were caught driving over the speed limit.

The owners of the offending vehicles have all been sent warnings through the post.

Some comments posted on social media questioned why warnings were sent out instead of speeding tickets.

“We are trying to educate people to reduce speed to lessen the chance of accidents in the areas. This is why people are getting warnings.

“We have used traffic officers on Bradford Road recently who have been issuing fixed penalty tickets for speeding. This was after we conducted the smiley SID speed checks. This may be the case for the areas we have conducted speed checks including New Street.”

The Dispatch reported on the Bradford Road day of action here.