Pudsey: New crossing will go ahead after council over-rules objections 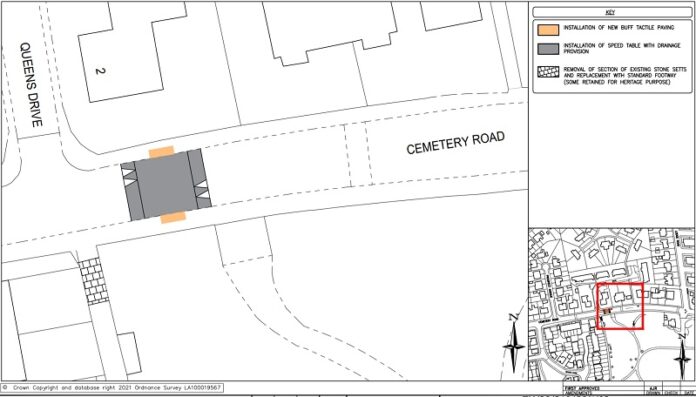 A couple of objections to proposed traffic calming measures along busy Cemetery Road in Pudsey have been dismissed by Leeds City Council.

The council’s proposals form part of the £554,000 Pudsey Walking & Cycling scheme, which will improve cycling and walking connectivity to and from Pudsey town centre, public transport hubs and the City Connect route between Bradford and Leeds.

Measures on Cemetery Road include the introduction of an informal crossing, through the use of flat-top traffic calming features and tactile paving.

Two householders had objected to proposed crossing when it was advertised to the public earlier this year.

They raised concerns about the impact on nearby properties, with objections highlighting vibration, noise pollution and vehicle emissions.

A council report published this week said there had been a review of the points raised in these objections, and discussions between residents and Pudsey’s councillors.

It was decided to re-advertise this traffic calming feature in a location away from these properties to alleviate their concerns, but the revised plans again attracted objections from the two households.

The council report over-ruled the objections, and added:

“The installation of the proposed traffic calming feature and informal crossing will increase accessibility on a key walking route in Pudsey, between Pudsey bus station to New Pudsey Rail Station. It will also offer enhanced links to community facilities and wider key public transport routes and corridors.”

The report said the proposals will offer greater independence and choice for children travelling to and from school, encouraging them to use more sustainable modes of travel and making it more pleasant to walk.

It’s also argued the measures will also improve the quality of life for the community by providing more accessible, safer and direct walking routes.

The report also says the measures will lower the average speed of traffic on a key road through Pudsey.

The report can be read in full here.