Mr Andrew is angry that there has been no mention of a rail link to the airport, with all three options released by the council only involving a road link.

He argues that although the Leeds Bradford International Airport Connectivity Study set out the potential benefit of a new link road, any road rather than a rail solution would result in further congestion and inhibit the potential for economic growth.

“I have been arguing for a rail link since I became a Member of Parliament, as one of the biggest issues that I am contacted about is congestion in the area. I have continuously raised the benefit of a rail link in Parliament and with the council, so I am disappointed that these plans appear to have been ignored.

“It is incredible that our regional airport, which has such ambitious plans for growth, is not being met with a rail connection. As well as the economic benefits that a rail link would bring, it would prevent further erosion of the precious greenbelt in the area. I will continue to argue for a rail link, and hope that the Council will listen to the benefits that it would bring.”

Information issued by Leeds City Council this week outlines three options to improve access to the airport, which has been identified as a key transport need to boost the future Leeds economy, as well as tackling existing congestion issues in the local road network. 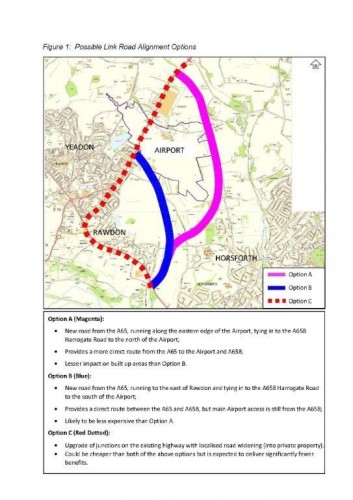 The information  – which can be seen at www.leeds.gov.uk/residents/Pages/Airport-Link-Road.aspx – gives initial details ahead of a full consultation process which will take place before the end of the year.

Of the three proposed options, two would see the creation of a new link road while the third consists of widening existing roads and upgrading junctions.

The third option does not involve building a new road but upgrading the existing A65 and A658 around Rawdon and Yeadon to the airport. This would see junctions upgraded and where needed some road widening.

Aside from boosting access to the airport, council chiefs say improved road access would also help to tackle existing problems of congestion and delays on the A65 and A658 Harrogate road as well as local road network issues.

Full details will be available for the formal public consultation process which is expected to begin in November and will include drop-in sessions. Anyone interested in registering an interest to be given details of the sessions when they are finalised can email AirportLinkRoad@leeds.gov.uk.

“Improving road access to Leeds Bradford Airport and tackling congestion issues on the local network is a priority for the city and region but we need to do it right which is why we are releasing this information now so people can see what we are proposing ahead of the full consultation process.

“The airport contributes more than £100millon a year to our economy, with its future growth essential to providing new jobs in the years and decades to come.

“That is why it is vital access to and from the airport is as effective as it can be while also serving the needs of the local communities, so we look forward to people considering the options and giving us their views when the full consultation process takes place.”