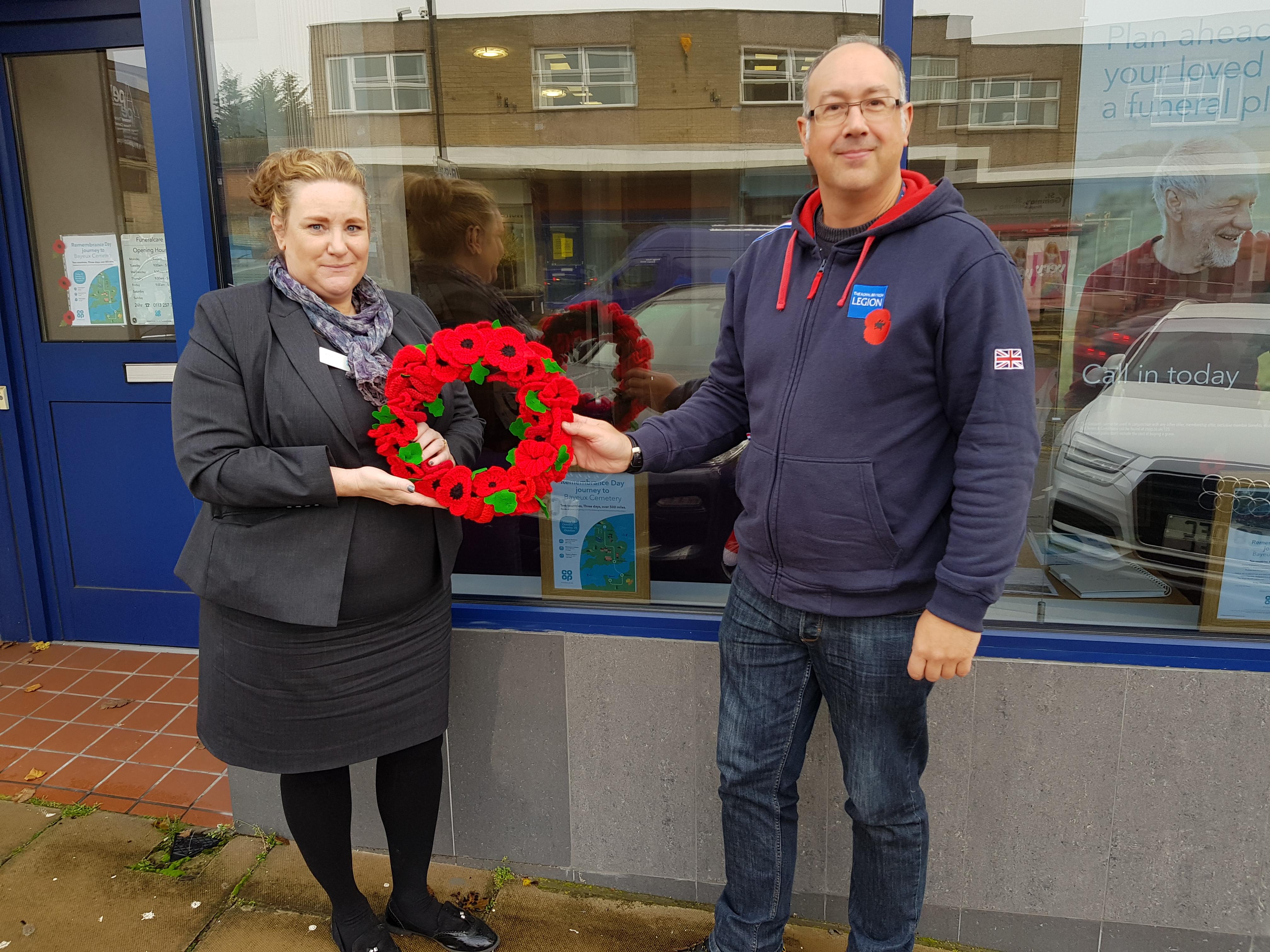 Colleagues from Pudsey Co-operative Funeralcare are making a journey to the D-Day beaches and cemeteries to retrace the last steps of the fallen.

They’re making the trip in memory of the people from Pudsey and District who served and lost their lives in World War Two and also hope to raise a generous amount in support of the Royal British Legion Poppy Appeal.

The trip, which takes place this weekend, means a 500-mile round journey for one family in a specially decorated Poppy car.

West Leeds Dispatch visited Debra and Carl Brightmore of the Co-operative Funeralcare, on Lidget Hill, Pudsey to find out more about their plans for the trip.

What was your inspiration for this trip?

“My grandfather served in Burma with the Duke of Wellingtons, but he never really spoke about his war experiences.

“When my grandfather passed away we didn’t know anything about his service or his medals, so I’ve always supported Remembrance whether its the Armistice Parade or putting up window displays – just to pay our respects really.

“I also had a friend who had been the in Army for years who had a sudden heart attack and died. We have a lot of family and friends connections to the Armed Forces.

“We organised the funeral of former Troop Sergeant Stewart Cooney (July 2016) who passed away with no known relatives.

“The public turnout was just amazing and that was the first veterans funeral I’ve ever been to. It sprung from there in my mind as to how many people turned up and the dignity that they show everybody, and them being marked as known and remembered.”

So from there how did you come to plan this epic trip?

“Never thinking that we could get over to France to visit the D-Day Beaches, we thought we would ask our company for backing anyway, and Regional Manager David Knowles liked the idea a lot, and has given full support including providing a car and fuel for the trip.

“Because we run a lot of community fundraisers here in Pudsey, we thought this trip would be fitting for a change and the time of year on the run up to Remembrance Sunday.”

Having attended the Heritage Open Day hosted by Pudsey & District Civic Society at Pudsey Town Hall, Debra and Carl saw the maps of the D-Day beaches and decided that they were a must-visit for the trip, so that they can pay their respects.

Their colleague Emma has loaned her grandad’s medals (who was a WW2 POW) to go with them on the pilgrimage.

The Pudsey Poppy Display has created an amazing wreath of knitted poppies for them to take to Normandy and Pudsey & Farsley Royal British Legion Branch are supplying poppy crosses for the war graves that they will visit.

They are also taking another generation along to learn of what happened there 75 years ago; their two teenage sons Archie and Tyler.

“The boys are really excited about going, they play all the games online…and they are really interested to learn the real stories behind it on a journey of discovery.”

If you see the amazing Co-op Poppy Car people are encouraged to photograph it and share with hashtag #PoppyCoopCar.

Keep a look out for the Co-op Funeralcare Remembrance window display on Lidget Hill, Pudsey, leading up to Remembrance Sunday (10th November this year).

Debra and Carl would like to thank the following for their support: Co-operative Funeralcare, Pudsey & Farsley Royal British Legion Branch and the Pudsey Poppy display.

Debra and Carl also want the families of those they are visiting in Normandy to know that their relatives will never be forgotten. Each soldier that they visit will be given a poppy cross on their grave, and they will read out what is known about their lives and be given a respectful moment of reflection in their memory: