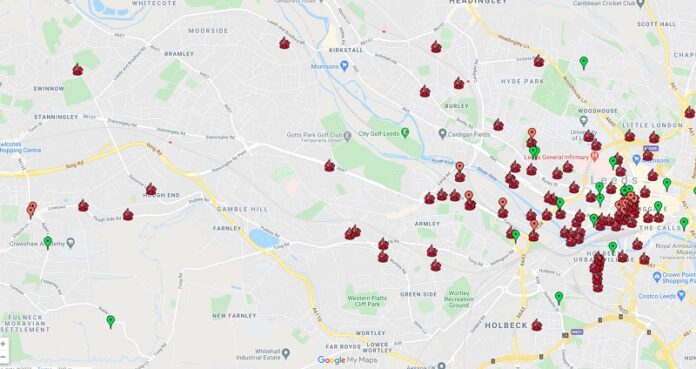 Did you know bombs fell on the Broadlea estate in Bramley? Or how several fell in Armley and Pudsey one tragic evening?

The exact location of bombs which fell across Leeds as part of a terrifying Second World War air raid have been revealed to mark the 80th anniversary of the raid this weekend.

The exact sites and stories of these bombs can be seen on new webpages, have been launched by Leeds Becket University students – and include sites in Armley, Bramley, Swinnow, Pudsey and Wortley.

25 tons of explosives were dropped on the city on 14 March 1941 targeting the Gas Works and industrial areas surrounding the river Aire, but the bombs damaged many other important sites including the Town Hall, the City Museum, telephone exchange and also people’s homes. It was the worst bombing the city faced during the war.

The raid caused more than 100 serious fires, damaged over 4,500 buildings and resulted in 65 people losing their lives.

Although officially too small to qualify for ‘Blitz’ status (which is defined as 100 tons of explosives) the city was pounded by incendiary and high explosive bombs in two waves of attack during the night and early hours of the following morning.

The team from the School of Cultural Studies and Humanities worked on a ‘Public History Project’ module to explore different aspects of the raid and have pinpointed the exact sites of many previously unlocated bombs.

Using an array of primary and secondary sources ranging from secret Home Security reports to academic texts, the Leodis photography archive, genealogy databases and historical maps the LBU group tried to uncover the full story of what had happened that night.

They also focused on the effect of the damage on civilian morale and heroism, these themes striking a balance between popular interest and historical context while also respecting and remembering those involved. Many of the stories researched happened in places still recognisable today.

Senior Lecturer in Public History Dr Henry Irving oversaw the project and said carrying it out during an unprecedented global pandemic meant the work took on an added significance:

“Though not as badly bombed as other places, we were all struck by how little had been written about Leeds. I’m really proud we have now been able to update the West Yorkshire Archive Service’s bomb map, which shows exactly where different bombs fell.

“The students also worked to connect individual incidents with the people affected, adding details about the legacies of the raid. I should also say that the subject matter was quite emotional – and, of course, we’ve had to do all of this while coping with lockdown!”

One of the groups working on the Leeds Blitz project focussed on the lives of wartime women, which resonated with BA English and History student Leanne Speight. Leanne remembered stories from her own Great Grandma who worked in a munitions factory, many of which are often little discussed:

“She was one of hundreds of thousands of women across Britain who did ‘their bit’ and it was clear she viewed her contribution as nothing out of the ordinary. But together, the women achieved something extraordinary, shattering gender stereotypes to step into traditionally male roles when the nation needed them most.

“We see clear examples of the courage demonstrated by women like my Great Grandma in the face of enemy action during the air raid on Leeds. Reports published afterwards show women did not hesitate to tackle fires caused by incendiary bombs, even when high explosives were falling nearby. Many of these women worked in roles where such actions would not have been expected of them.”

The project was a partnership with Leeds Museums and Galleries, the Leeds Local and Family History Library and the West Yorkshire Archives Service.

You can view the Leeds Blitz project here.