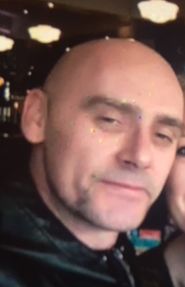 UPDATE: Mr McIlwain has now been found. Police have thanked the public for their help.

ORIGINAL POST: Police are appealing for information to help trace a man who has gone missing in Farsley.

Jim McIlwain, aged 40, was last seen at his home in Farsley at about 2pm yesterday (19/3) and there are concerns for his welfare.

He has tattoos including a tribal pattern on the lower half of his right arm and a faint tattoo on his left hand. He has a mole on the right side of his mouth and a pierced nose and left ear. He wears grey Superdry glasses and has a West Country accent.

“We are very concerned for his welfare and urgently need to find out where he is so we can check he is okay.

“We would like to hear from anyone who has seen him or who has any information that could assist us in tracing him.”

Anyone with information is asked to contact the Special Operations Room at Elland Road via 101 quoting log number 1919 of March 19.