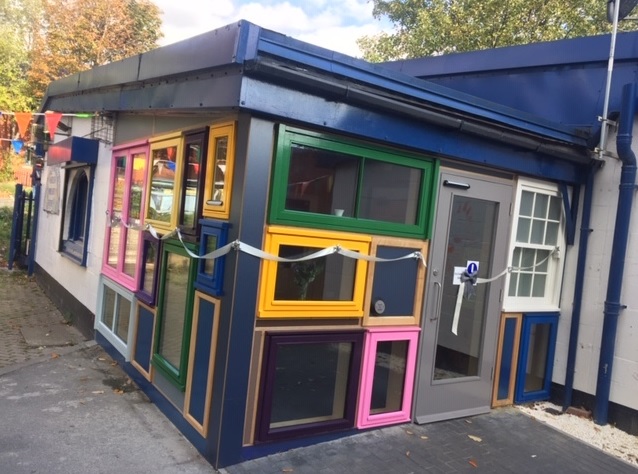 The new entrance to the old community centre creates a great new space where people can access the activity centre.

The work is one of only 20 across the UK to have been funded by a grant from Power to Change’s initial Grant Project. Local companies have donated materials for the entrance.

“Thank you to Project office – Leeds Beckett University staff and students and to the double glazing firms who have so generously donated materials to keep the cost of the project within budget.

“Also thanks to the contractor Chippendales for being a community friendly contractor, and to the members of the local community who have helped design the new entrance and the bespoke community artwork that will feature in the new lobby area!”

In addition to the new entrance the centre unveiled new play area and sensory garden.

The space has wheelchair access and features a bug hotel, local wild flowers and plants, a series of planters for community use and some playful features for children.

This work has been completed with the help of volunteers from a wide range of local businesses including Llyods most recently – and help from Castleton Primary School pupils and local volunteers. A spokesperson added:

“This has been a true joint effort! In this case major thanks should go to our main partner on the project Alex from Hyde Park Source and big thank you to the funder Big Lottery Awards for All.”

On the same day, the centre said goodbye to community leader Bill Graham, who is leaving for a fresh challenge in Bradford.

Mr Graham had been at New Wortley since 2010 and in that time has lead a team of dedicated volunteers and staff to slowly transform the neighbourhood and dramatically improve people’s lives.

He helped secure funding to build a new community centre building, lead the charge to deliver innovative support services for people with mental health problems and championed a new community-owned homes project which he hopes will see new affordable homes built in the inner city area via a newly-created housing association in the next couple of years.