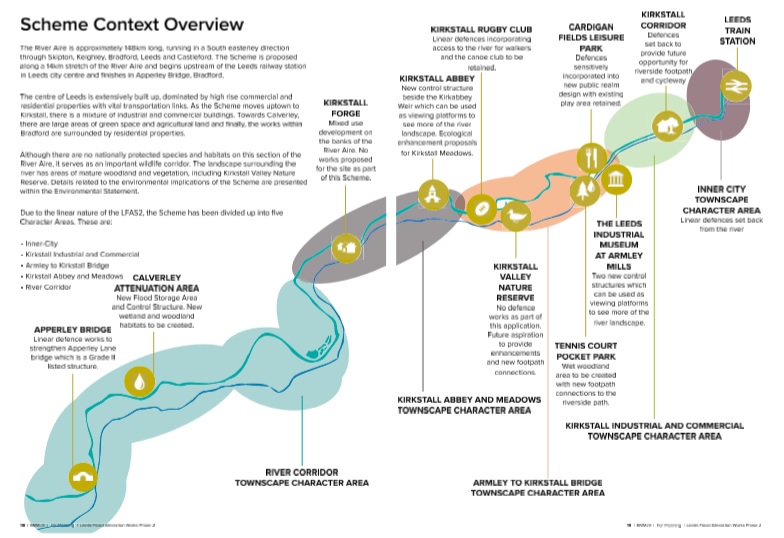 Fresh images revealing more details about the proposed flood defences in Kirkstall have been released by Leeds City Council.

The images depict different parts of the multi-million scheme, which runs through the heart of the Kirkstall Valley.

As previously reported by the Dispatch, people who live and work in West Leeds are being invited to come along to a couple of drop-in events this month to find out more about proposals for the next phase of the Leeds Flood Alleviation Scheme.

The events have been organised following pressure by community groups and organisations in the Kirkstall and Burley area who were concerned about a lack of consultation on the proposals.

They will have the opportunity to have a look at plans and talk to members of the project team responsible for developing the second phase of the flood defences being proposed to protect communities upstream of the city centre.

The events will be held on Wednesday 13 February and Tuesday 26 February, at Milford Sports Club, Beecroft Street, between 2pm and 8pm.

Visitors will have the chance to ask questions and get more information about the proposed defences and accessibility works such as new pedestrian bridges.

Leeds City Council has worked alongside the Environment Agency to submit a planning application which will invest £112.1 million in flood prevention measures along the River Aire catchment.

A range of measures have been put forward to reduce the risk of flooding along a 14-kilometre stretch, including the A65 Kirkstall Corridor which was badly hit by the impact of Storm Eva at Christmas 2015 and ending at Apperley Bridge, Bradford. In addition to this a natural flood management programme is proposed across the catchment, with pilot projects already under way.

“During this event, the joint Leeds City Council and Environment Agency team managing the construction of the next phase of the Leeds flood defences will be available to talk to visitors about any concerns they may have and provide clarification about anything that they are uncertain about.

“Although Leeds City Council has submitted the proposals for approval by planning officers, the detailed design of the scheme has not yet been decided and we will be seeking valuable feedback from both residents and businesses at these events and at further stages of the process.”

ARTICLE UPDATED 15/2/19 to clarify images were released by Leeds City Council, not the Environment Agency, as originally stated.