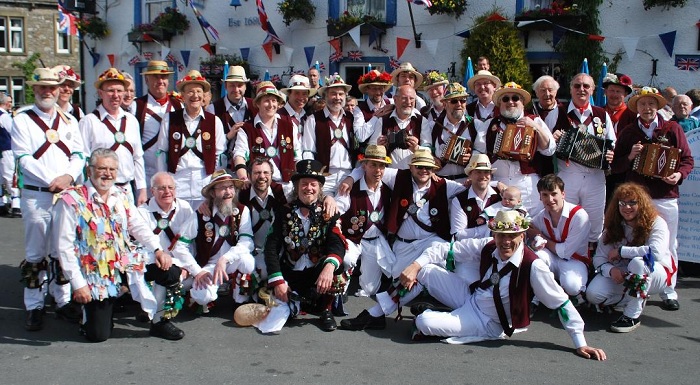 Morris dancers in Leeds have been scripting and organising a traditional-style Spring Mummer’s play during lockdown – but this year it’s being performed with a difference.

In ordinary circumstances this would have been performed at the 68th annual Leeds Morris Tour of Yorkshire – but this was cancelled due to eh Coronavirus pandemic.

Leeds Morris Men (LMM) are now producing an online version which will be going live over the Bank Holiday weekend.

“Since then, we’ve been dancing in the Leeds area and further afield, with several foreign trips included – we were due in Marrakech in March for their International Folk Festival before lockdown put a stop to it.

“In the past 20 years or so, we have performed a (semi-) traditional Mummers’ Play at Christmas and/or Easter times around the area, in pubs, clubs, social centres and even cinemas.

“If you don’t know what one of these is, imagine a piece of street theatre (in verse) typically featuring a Fool or Jester, Father Christmas, St George, his opponent, Bold Slasher… and a Doctor to revive the combatants when they ‘slay’ each other in a mock duel.”

“The present play is obviously lockdown-based, though it takes traditional tropes and figures.

“Lockdown has obviously made our usual practice unworkable, but we have called on the techie expertise of the younger members of the team to transpose the script to media treatment.

“It’s required a great deal of to-ing and fro-ing, as you can imagine, and the editing seems likely to be a mammoth task, but we have great faith in our youth: they have already produced an excellently ‘spliced’ video of the jig we customarily dance at 10am in Kettlewell on Bank Holiday Monday, which will appear on social media at that time-ish.

“So it’s not quite as we’d like to present it – but is anything as we’d like it at this time? It’ll be interesting at least – and probably more amusing, since it will expose the technical limitations of the cast (self included) rather more than they may have intended. “

More details on Leeds Morris Men, who perform annually at Kirkstall Festival, can be found here.