Meet the volunteers brightening Bramley one box at a time 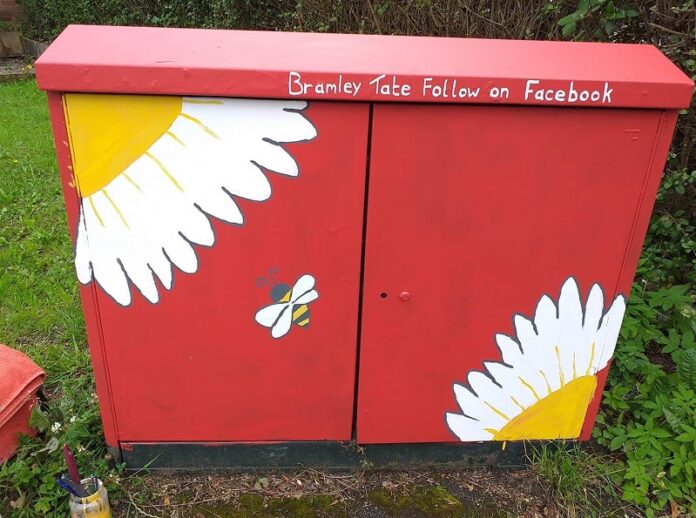 If you take your daily walk in Bramley you may have noticed some new artwork that is brightening up the area.

Dawn Fletcher, from Bramley Look for a Book, had the idea of painting junction boxes – and launched the Bramley Tate project.

Dawn and her daughter Eliza started out painting the boxes. And it has now really taken off with arts collective Pyramid of Arts – which run groups in Bramley – designing and painting junction boxes with their art group as well as other local artists, including Leeds West Rocks.

Then lockdown happened and everything ground to a halt.

“We couldn’t get paint from anywhere. We had bits and bobs at home but not much… we decided when lockdown eased to make a start…. boom!

“Box number one was started and finished within a couple of days. Things slowly started to open up again and we managed to get a bit of paint from people donating bits and bobs, so we cracked on and did a few more.

“We have just completed our 26th box. We have had a little bit of help along the way a couple of local artists have done a couple each (fantastic work) and we have more eager to help out in the future.”

The paint is supplied by Seagulls, meaning nothing goes to waste as the paint is recycled from unfinished pots.  Books are a theme of many of the boxes but designs are branching out.

“This is a fantastic project. The feedback from the community has been great with some really positive comments and so I would like to thank everyone who is involved, especially Dawn for coming up with such a great idea.

“People are spotting the boxes as they are out and about in Bramley and we have a Facebook page called Bramley Tate where photos of all the designs are posted. We are definitely brightening up Bramley one junction box at a time.”