Leeds Corporation, as it was known in 1869, had bought the three gas companies operating in Leeds at the time at a cost of three quarters of a million pounds, writes Mark Stevenson.

One of these was and still is in Wortley. 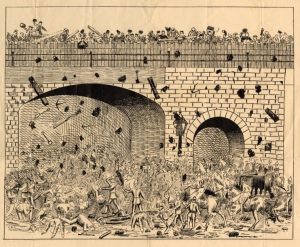 A Gas Committee was formed to run these three gasworks and their aim of reducing people’s gas bills was largely achieved. The Committee had also agreed to three eight-hour shifts instead of two twelve-hour shifts when asked by the Union to do so.

As a cost-cutting exercise in 1890 the Gas Committee decided that during the summer months when demand was low, they would reduce the Gas Workers hours.

The Union was having none of this and called for a strike. Knowing that the Gas Committee was bringing in Blacklegs from down south the union organised the Leeds Gas workers to try and stop this.

On 1st July 1890, 500 police officers escorted 260 Blacklegs, as they made their way towards the New Wortley gasworks.

The mayor and other members of the corporation also accompanied the column. At some point someone among the thousands of striking Gas Workers realised the nearby railway bridge on Wellington Road would be a good place to stop the column entering the gasworks.

One report at the time described it as:

“The bridges were crowded with men… and they massed piles of missiles. As they came within range, the fire was directed with simply terrific force on them. The scene that ensued simply defies description, bricks, stones, clinkers, iron belts, sticks etc. were hurled into the air to fall… upon and amongst the blacklegs and their escort.” 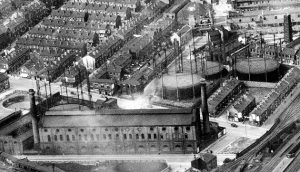 Many on both sides were injured and it took the reading of the Riot Act and the threat of troops been used against the strikers for them to disperse.

In the end the strike ended in the strikers’ favour.