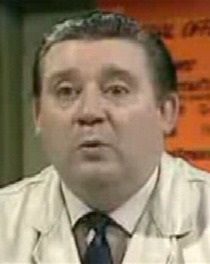 Actor Bryan Mosley was born in 1931 and lived at 49 Rosebank View in Burley, writes Mark Stevenson.

His ambition in life was to be a missionary. But by the time he had finished his National Service in the RAF, he wanted to be an actor as he had learned to fence while in the RAF and made good use of this as a fight director in the productions he was in.

In 1970 he was killed by Michael Caine in Get Carter by being thrown off a car park roof.

As a fight director, he coached the likes of Robert Hardy and Tom Courtenay, as well as Neil Diamond.

He was one of the founder members of The Society of British Fight Directors.

As much as Mosley liked his action roles it is as Alf Roberts in Coronation Street that most will remember him as.

He starred in more than 1,800 episodes before his character Alf made his last appearance on New Year’s Day 1999 dying peacefully on screen in his sleep. Mosley died just weeks later of a heart attack in Shipley, aged 67.