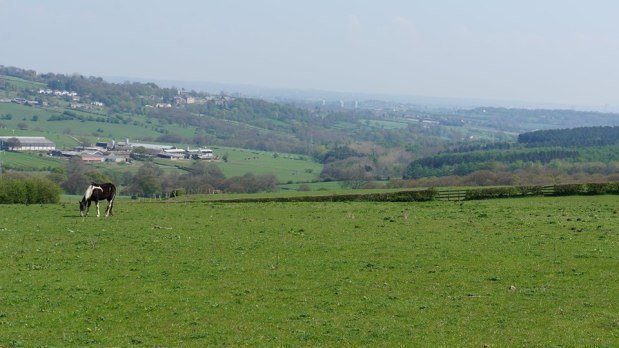 Bradford Council has been criticised for moving ahead with plans for a link road – which could unlock new large-scale housing development in the green belt between Bradford and Pudsey.

The local Green Party has accused the Council of “acting like a dictatorship” over plans for a new £64 million road that will link the Westgate Hill roundabout with the East of the city.

The aim is to reduce congestion on Tong Street and the Holme Wood Area, as well as “unlocking” sites for future development, sparking concerns on the impact on the green belt bordering Tong Village and the Fulneck area of Pudsey.

The Tong and Fulneck Valley Association fears up to 2,500 new houses could be built in the greenbelt between Bradford and West Leeds.

In July a Bradford Council scrutiny committee raised concerns about the plans during a meeting.

But the Council and West Yorkshire Combined Authority are still pushing forward with the plans, which has raised the ire of the Green Party.

However, the Council has claimed that when the item went before the Regeneration and Environment Scrutiny Committee in July, it was just for members to comment on the procurement strategy to appointment of a suitably qualified consultant – not to decide whether the road goes ahead or not.

Green Party representative Matt Edwards has said: “Bradford Council should not be wasting tax payers’ money on a scheme that may not see the light of day. Instead of trying to push this through undemocratically, the executive need to listen to this committee and the thousands of local people who objected. They need to sit down and come up with a real plan to make things better for people living in the area that will reduce traffic, not just move it around.”

Councillor Martin Love (Shipley Ward), who voted against the plans has said:

“It is clear that this road is not wanted. Road building schemes generate more car journeys, creating a vicious cycle.

“What more does the Labour Group want to hear before they drop these plans?”

Julia McGoldrick, from the Tong and Fulneck Valley Association, added:

“This is a kick in the teeth for all the local people who want to see this precious area of green space between two of the country’s largest cities protected for future generations.

“We all know that Bradford Labour have been trying to force this road through because it will mean they see 2,500 houses built in the valley.

“This part of Bradford just cannot cope with this level of housing development. Any benefits for traffic will be cancelled out completely by the massive influx of new cars in the area.”

“A potential access road in south Bradford is just one of a wide range of transport projects we’re looking at for the Bradford district, including high-speed rail through the city centre and mass transit for the region, both of which would be hugely transformative for sustainable

“I think the Green Party misunderstand the process and how it works. At all times we’ve followed due process for the potential access road. The remit of the scrutiny committee was purely to comment on the procurement, as all contracts over £2m go to committee.

“We want the best possible outcome which will benefit local people and we are exploring the options to look at their relative advantages and impacts.

“As was explained in depth at the committee, issues around climate change and air quality will be fully investigated and considered as part of the feasibility work.

“Feasibility studies are normal for projects of this kind and the study will seek to address concerns and suggestions raised by local residents and the scrutiny committee. Ward councillors who are close to the local communities will continue to be involved in every stage of the process.

“Local people will be widely consulted and there will be plenty of opportunities for everyone to have their say on any proposals which are developed.

“Sustainable transport options such as walking and cycling will be key to the project and the scheme will include high quality segregated cycle lanes along its length.”

TWO areas of Bradford have been identified as “future growth locations” for West Yorkshire – meaning they could see major housing and employment developments in the coming years.

One of the areas is Holme Wood, which could see a ‘large-scale’ development of more than 1,000 homes or employment developments over 15 acres in size.

West Yorkshire Combined Authority has refreshed its “Spacial Priority Areas” (SPAs) – a blueprint of where in the region future residential and employment growth should take place.

The Authority, made up of five West Yorkshire Councils including both Leeds and Bradford, has not updated its list of SPAs for a number of years.

At a meeting of the Authority’s Place Panel last week, members were given an update on the refreshed plan.

Leeds city centre is classed as the “Core City” within West Yorkshire, meaning it will make up the highest proportion of housing growth in the future.

The document also identifies areas across West Yorkshire as “Future Growth Locations” that could see large-scale residential developments (of over 1,000 homes) or employment developments over 15 acres in size.

In Bradford there are two such sites identified – Apperley Bridge/Esholt and Holme Wood.

The Combined Authority says the refreshed plan was drawn up as the previous priority areas “were no longer aligned well with our strategic policy position and did not allow for the inclusion of the priorities being put forward by local authorities.”